No cameras are allowed in the Sistine Chapel, and the people who try to get around it are hunted down by the attendants and the tour guides! So we will have to rely on something other than my own pictures to talk about the Chapel.

The Sacellum Sixtina was originally just called the Larger Chapel, Capella Maggiore; it received its current name because it was rebuilt by Pope Sixtus IV in the fifteenth century. Its importance lies in the fact that it is the official chapel of the Capella Pontificia, which is one of the two bodies making up what is called the Papal Household -- the body of people whose responsibility is to assist the Pope in his day-to-day ceremonial duties. The Pontifical Chapel in particular is concerned with the Pope's liturgical duties.

The ceiling of the chapel was originally a blue sky with stars -- very expensive, actually, since pure heavenly blue required the use of lapis lazuli in the paint; this expensive work would be undone to make way for Michelangelo about two to three decades later. The side walls had paintings by Domenico Ghirlandaio, Sandro Botticelli, and others, some of which still exist. They are in a band containing two cycles, the Life of Moses (to the south) and the Life of Christ (to the north); above these were painted a Gallery of Popes.

The most famous part of the Chapel, of course, is Michelangelo's painting, made between 1508 and 1512. He topped the Gallery of Popes with the Ancestors of Christ, put prophets and sibyls in the large pendentives, and painted panels on the ceiling itself of the Creation, the Fall, and the Deluge.

Much of the basic scheme would, however, be partially disrupted by the painting of the Last Judgment above the altar (by Michelangelo toward the end of his life), which ended up eliminating the Nativity of Jesus and the Finding of Moses, as well as several of the Popes and Ancestors.

Much of the work is excellent in its own right, but everyone comes for the ceiling:

(You can click to see more detail, and you can see a labeled version here.)

There are nine Central Stories, in three groups. I add the commentary of Giorgio Vasari from his Lives

...in order to display the perfection of art and also the greatness of God, he painted in a scene God dividing Light from Darkness, wherein may be seen His Majesty as He rests self-sustained with the arms outstretched, and reveals both love and power. In the second scene he depicted with most beautiful judgment and genius God creating the Sun and Moon, in which He is supported by many little Angels, in an attitude sublime and terrible by reason of the foreshortenings in the arms and legs. In the same scene Michelangelo depicted Him after the Blessing of the Earth and the Creation of the Animals, when He is seen on that vaulting as a figure flying in foreshortening; and wherever you go throughout the chapel, it turns constantly and faces in every direction. So, also, in the next scene, where He is dividing the Water from the Earth; and both these are very beautiful figures and refinements of genius such as could be produced only by the divine hands of Michelangelo.

He then went on, beyond that scene, to the Creation of Adam, wherein he figured God as borne by a group of nude Angels of tender age, which appear to be supporting not one figure only, but the whole weight of the world; this effect being produced by the venerable majesty of His form and by the manner of the movement with which He embraces some of the little Angels with one arm, as if to support Himself, and with the other extends the right hand towards Adam, a figure of such a kind in its beauty, in the attitude, and in the outlines, that it appears as if newly fashioned by the first and supreme Creator rather than by the brush and design of a mortal man. Beyond this, in another scene, he made God taking our mother Eve from Adam's side, in which may be seen those two nude figures, one as it were dead from his being the thrall of sleep, and the other become alive and filled with animation by the blessing of God. Very clearly do we see from the brush of this most gifted craftsman the difference that there is between sleep and wakefulness, and how firm and stable, speaking humanly, the Divine Majesty may appear.

Next to this there follows the scene when Adam, at the persuasion of a figure half woman and half serpent, brings death upon himself and upon us by the Forbidden Fruit; and there, also, are seen Adam and Eve driven from Paradise. In the figure of the Angel is shown with nobility and grandeur the execution of the mandate of a wrathful Lord, and in the attitude of Adam the sorrow for his sin together with the fear of death, as likewise in the woman may be seen shame, abasement, and the desire to implore pardon, as she presses the arms to the breast, clasps the hands palm to palm, and sinks the neck into the bosom, and also turns the head towards the Angel, having more fear of the justice of God than hope in His mercy.

7. The Sacrifice of Noah
8. The Great Flood
9. The Drunkenness of Noah

[Vasari assumes, not surprisingly, that (7) is the Sacrifice of Cain and Abel, but it is usually thought today to be the sacrifice of Noah after the Flood, the sequence of stories being displaced in order to allow a greater amount of room for the Flood itself.]


Nor is there less beauty in the story of the sacrifice of Cain and Abel; wherein are some who are bringing up the wood, some who are bent down and blowing at the fire, and others who are cutting the throat of the victim; which certainly is all executed with not less consideration and attention than the others. He showed the same art and the same judgment in the story of the Deluge, wherein are seen various deaths of men, who, terrified by the horror of those days, are striving their [Pg 35] utmost in different ways to save their lives. For in the faces of those figures may be seen life a prey to death, not less than fear, terror, and disregard of everything; and compassion is visible in many that are assisting one another to climb to the summit of a rock in search of safety, among them one who, having embraced one half dead, is striving his utmost to save him, than which Nature herself could show nothing better. Nor can I tell how well expressed is the story of Noah, who, drunk with wine, is sleeping naked, and has before him one son who is laughing at him and two who are covering him up—a scene incomparable in the beauty of the artistry, and not to be surpassed save by himself alone.

Above the altar is the famous Last Judgment, in which all are stripped naked, having nothing but their souls, some falling to hell and others rising to heaven: 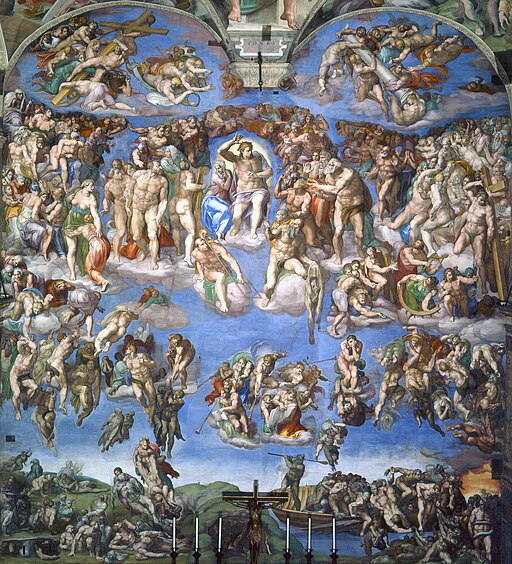 Michelangelo's extensive use of nudes throughout his work stirred up quite a bit of controversy, and at least once almost led the ceiling being stripped entirely and redone.

After the Sistine Chapel we headed toward St. Peter's. Along the way there are statues in high niches. This one was particularly noticeable because it was right where we cam out: 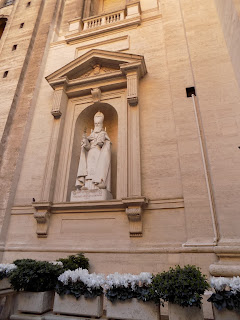 The inscription on the base is in Latin and Armenian and identifies the statue as St. Gregory the Illuminator of Armenia. St. Gregory preached the gospel in Armenia, and in 301 he baptized the king and all his court, thus making Armenia the first officially Christian nation in the world. In 2001, Pope John Paul II was visiting Armenia for the 1700th anniversary, and agreed to a request by the Armenian Catholic patriarch to put up a statue of St. Gregory in the Vatican somewhere. A design contest was launched, and the winner was the Parisian Khachik Kazandjian, himself of Armenian background. The statue was put in the last niche that had not yet been filled, and that is where we saw it.

to be continued
Posted by Brandon at 8:36 AM