Today is the feast of St. Juan de Yepes y Álvarez, better known in English as St. John of the Cross, Doctor of the Church. St. John was a Carmelite who, not quite satisfied with the Order, considered becoming a Carthusian -- until one fateful day he met St. Teresa of Ávila, who was trying to get support for Carmelite convents based on the original rather than the modified and mitigated rule that the Carmelites had come to follow; she was just started her second, and it was in the course of doing this that she happened by chance to meet St. John, who just happened by chance to have taken a trip to the town in which she was doing it. It shows what a chance meeting between saints can do. St. John was taken with the idea and after studying how it worked, founded the first monastery in St. Teresa's reform, and the Discalced Carmelites began to grow at a rapid pace from there. It would be a rocky road -- St. Teresa had to face the Inquisition and St. John was arrested several times, due to the instigations of Carmelites who were opposed to the reforms. But they survived all the trials and did not stop. St. John died of infection on December 14, 1591. 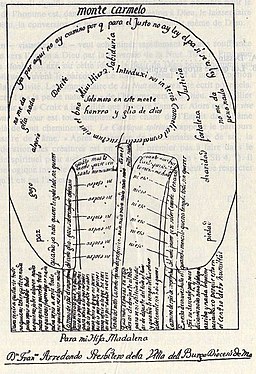 St. Edith Stein on reading St. John of the Cross:

"Pure love" for our holy Father John of the Cross means loving God for his own sake, with a heart that is free form all attachment to anything created: to itself and to other creatures, but also to all consolations and the like which God can grant the soul, to all particular forms of devotion, etc.; with a heart that wants nothing more than that God's will be done, that allows itself to be led by God without any resistance. What one can do oneself to attain this goal is treated in detail in the Ascent of Mount Carmel. How God purifies the soul, in the Dark Night. The result, in the Living Flame and the Spiritual Canticle. (Basically, the whole way is to be found in each of the volumes, but each time one or the other of the stages is predominant.)