Casting Statues into the Water

There has been some drama around the rather poorly organized and all-too-secretive Amazonian Synod currently taking place in Rome. On Friday, October 4, there was a tree-planting ceremony in Vatican City that involved bowing before statues of a naked pregnant woman. There was very little explanation of this available anywhere. Some speculated that it was a cultural representation of the Virgin Mary; some that it was an idol of the indigenous goddess Pachamama. When asked for clarification, the Vatican Press Office denied that it was the Virgin Mary and more vaguely said that it was a feminine figure (which I think was generally recognized) that was neither pagan nor sacred, and in some way or other "represented life" -- but they also seem clearly not to have had a definite idea of what it was, and the Vatican Press Office is notorious for guessing what things probably meant before actually finding out, so who knows. Very recently, two men broke into the church in which the images were being housed and dumped them in the Tiber. The act seems to have had the entirely unsurprising effect of confirming everyone in the opinions they made based on their immediate gut reactions.

I am reminded in all of this of St. Vigilius. St. Vigilius was a bishop of Trent in the fourth century. He seems to have been quite well educated; there are stories of him being educated in Athens and of being an acquaintance of St. John Chrysostom. St. Vigilius was orthodox in a time when bishops could not be guaranteed to be orthodox; he was a vehement anti-Arian. St. Vigilius was also the sort of person who has difficulty with rules and boundaries. He didn't just preach against Arianism in his own diocese; deciding that the local bishops were not doing enough, he preached against Arianism in their dioceses, too, without permission. He did a number of things of the same rule-breaking sort. He finally came to his untimely but unsurprising end when he went with his brothers, St. Claudian and St. Magorian, to preach to a valley of pagans. He was apparently a charismatic preacher and was doing fine, until in the heat of the moment during preaching, he grabbed the nearest idol, ran down to the river, and threw it in, at which point the pagan population reacted, perhaps not entirely unreasonably, by stoning the three brothers to death on the spot. They were canonized, and St. Vigilius became a fairly important local saint, the patron saint of Trento, in fact, with the gorgeous Romanesque cathedral of the Archdiocese of Trento dedicated to him. Here you can see it with its most famous, and most ironic feature, the beautiful Fountain of Neptune: 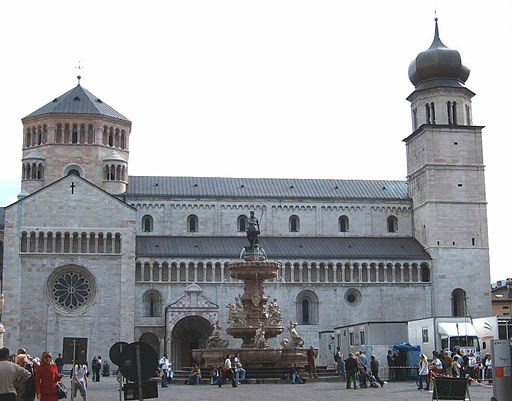 Yes, the saint whose martyrdom was precipitated by throwing a statue of a god into the water is introduced to the world by a fountain with a statue of the god of waters, which, no doubt, the boundary-breaking St. Vigilius would have torn down and thrown into the nearest river if given the chance. God perhaps has a sense of humor, and Catholic architects and artists certainly do, or at least once did.

There is an important principle of Catholic moral theology that we would do well to remember, particularly in this viciously censorious age: tutiorism, also known as rigorism, is wrong. Tutiorism is the position that only the morally safest path of action is morally permissible. ('Tutior' means 'safer'.) Tutiorism makes the modern mistake of trying to do things entirely by rule and method, leaving nothing for the virtue of prudence. But prudence is (literally) the decisive virtue, and a prudent person may well have good reason in this or that situation to make the less safe choice, the one that not everyone would support, the one that deviates a little farther from the safe rule than some people will find comfortable. Some things are wrong in themselves; others for other reasons. When dealing with the latter, there are often legitimately diverging views. By definition there is never anything really wrong with choosing the morally safe path, the path that sticks most closely to the usual moral guidelines, that most people would agree with most of the time. There are times when it may show a lack of insight into the situation, but lack of insight is not, in itself, a moral failing. It may or may not be wrong to take the morally less safe path; but there is room in that 'may' that needs to be respected.

The reactions of people to the casting of the statues into the water divide into two groups. The first group thinks it a bad thing. It is generally wrong to break into churches and take what is not yours, they say. This is very true. It is morally important not to jump to the least charitable interpretation in matters of cultural differences, they say. This is very true. The person who is really responsible in this matter is the Bishop of Rome, and it is not the place of laypersons to do his job for him, they say. This is true. The most appropriate response of laity to the problems besetting the Church is to pray. This is very, very true. All of this is excellent advice. It is likely the morally safe course; you won't go wrong in honestly and sincerely following it.

The second group thinks it a defensible action. The bishops have no right to play fast and loose with these things, it hasn't been a secret that a great many laity have been scandalized by this, and the responsible parties have not taken appropriate steps to address the matter; so they say. This is definitely true. They say that all Catholics without question are called to uphold the faith, and the laity must not sit back passively and expect the bishops to do everything. This is true. Laypersons stepping back and waiting for bishops to do the right thing has been a contributing factor to a great many scandals recently, they say. This is true. It is intolerable for Catholics even to be ambiguous about actual idol worship, they say. This is very true. This is good advice, as well. You could certainly go wrong if it led you to go around breaking into churches and destroying things as a general rule; but it is entirely possible that one day, on some rare occasion, you might be faced with an idol in the church, a day on which your appeal to the morally safe path might be dangerously like a hypocritical cover for laziness in upholding the faith.

And there is another side of it, too, for there is more than one thing happening here. It is less morally safe to tolerate what might possibly be idolatrous than it is to take an unequivocal stand against it.

And the thing of it is, there is no rule or method that can guarantee that you will get it right. The best thing you can do is cultivate the virtue of prudence as best you can and make your best rational judgment about whether to cast the statues into the waters. But it is possible for it to be a good judgment, either way, depending on the exact details of the situation. And even if your judgment is not the best possible judgment in the situation, it may be good enough; and even if it is not, there is a very vast difference between arguing that it was misguided and condemning the intention with which it is done. Sometimes people err honestly. And I don't think it can be denied in this particular case that the hierarchy has been less than appropriately clear about what was involved here. I personally would say that they have no one to blame but themselves. And here, as with the choice itself, the first step to take is to consider oneself: Are you supporting the safe path honestly or because it provides cover for your laziness and lack of zeal? Are you supporting the bold path cautiously or foolishly? And are you recognizing that in matters of ambiguity there can be honest differences in judgment?

In any case, two rather different approaches to the question, by Simcha Fisher and Jennifer Fitz, both entirely reasonable.
Posted by Brandon at 10:17 PM