Timeline of the Age of Napoleon

In the morning of Tuesday 16 May 1809, a Berline flanked by horsemen pulled out of Schönbrunn and drove at a leisurely pace along the right bank of the Danube. It was an unremarkable carriage, olive coloured, without coats of arms on its panels. As it passed, the Austrian peasants raised their black, broad-brimmed hats, out of caution, rather than respect, because they recognized the officers riding their long-maned Arabs at a trot, a panther skin under their seats, uniforms in the Hungarian style -- white, scarlet, heavy with gold -- a heron's feather in their shakos: these young gentlemen were the permanent escort of Berthier, Major-General of the occupying army. (p. 3)

Summary: While The Battle follows a number of people, the primary protagonist is Louis-François Lejeune:

Lejeune is an artist who, after having volunteered for the army in the French Revolutionary War, had a brilliant military career. At the time of the Battle of Essling, he is an officer of the General Staff. The story picks up in Vienna, where Lejeune has become friends with Henri Beyle; both Beyle and Lejeune have fallen in love with the same (fictional) Austrian woman, Anna Krauss. It is, of course, a doomed love affair, for both; Anna cannot simply stop being an Austrian whose country is at war with the French. And it is, in any case, difficult to carry on a love affair when you are going into a huge mess of a battle.

Despite being our primary character, however, Lejeune is hardly the only character; Rambaud puts a great deal of effort into covering the diversity of temperaments at the battle. Some are gentle, others calculating. Some are in the military from half-literary ideas of army, some just fell into it, some are sociopaths in it for the butchering and raping. Almost all of the major figures are half-distracted by things that have nothing to do with the battle at all. And, of course, there is Napoleon himself who, in the middle of an army, is clearly very, very alone; he has a good head for a battlefield, but he is very unsure of himself, with all the insecurity of a vain man who knows beyond any shadow of a doubt that everyone around him is only telling him what he wants to hear.

Napoleon attempts a forced crossing of the Danube at the island of Lobau, near the villages of Aspern and Essling, but despite the skill of his military engineers, it turns into something of a disaster. The Austrians, under the highly competent but also overly cautious and hesitant Archduke Charles, are upstream, and the first attempts to build a bridge are plagued by the Austrians sending an endless supply of trees and boats filled with rocks downriver to tear it down. But the Archduke is not primarily concerned with preventing the crossing; his actual plan is to attack the French army soon after they cross, before they can receive reinforcements from the Army of Italy. Napoleon, no fool in matters of war, recognizes this and is attempting to compensate by bringing all the battalions he can across the river. Fighting begins at Aspern, where the Austrians hit the French much harder than expected and seize the village; Masséna is able to recapture it, although at high cost. Fighting at Essling, which Lannes is attempting to hold, is scarcely less fierce. Meanwhile, Napoleon is bringing more and more of his troops across the bridge.

The second day of fighting is even more fierce and muddled than the first. Lannes manages to hold Essling, but Masséna is pushed out of Aspern; the French almost win when they temporarily break through Austrian lines, but Archduke Charles, his caution serving him well on this occasion, had an extra reserve he is able to bring up. The French will almost be driven into the Danube, but the battle will end in total exhaustion on both sides. The cost is high, over forty thousand dead on the field, twenty thousand on the French side in what was for the French a complete failure, and Marshal Lannes wounded in a way that will require amputation, an amputation he will not ultimately survive. 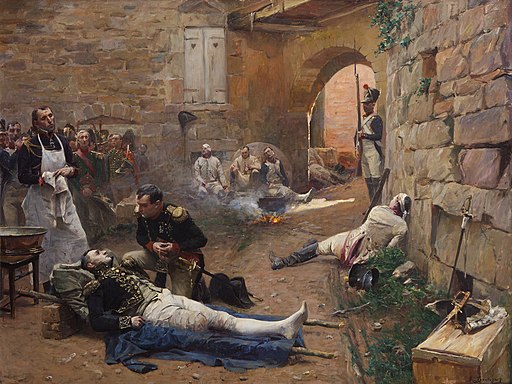 Lejeune will continue with his army career, an illustrious one except for a period of disgrace when he left his post in the terrible march on Moscow, and will eventually paint a famous series of paintings of battles of the Napoleonic Wars. Beyle will eventually publish a number of books, including Vie de Napoléon and Le Rouge et le Noir, under his pen name, Stendhal. And Napoleon, of course, will face ever more serious difficulties until his final end.

Balzac, who originally had the idea for a book on the Battle of Aspern-Essling, had intended not to include Napoleon, or at most to have him show up briefly, and to have no women at all, the point being to show someone in an armchair what battle is like. Rambaud deviates from both of these. Adding the fictional affair with Anna enlivens the story quite a bit, I think, but I go back and forth on whether making Napoleon himself a major character was a worthwhile move. Rambaud's depiction of Napoleon is interesting, but there are already so many characters involved in the story -- it has an epic's cast despite not being epic-length.

A grenadier with shrapnel in his leg dragged himself out of the line of fire. When he fell to the ground, he had snatched up some of the coins the standard bearer, his former neighbour in the line, had hidden in the folds of his stock. He surreptitiously opened his hand, took a close look at his treasure and muttered bitterly that it wasn't worth anything any more. On 1 Janueary 1809, the Emperor had removed from all coinage the motto which still figured on the coins he had picked up:

UNITY, INDIVISIBILITY OF THE REPUBLIC. (p. 237)

Recommendation: Recommended, if you like war novels. It's an easy and vivid read, and makes a considerable attempt at accuracy, although for the same reason parts of it are quite brutal.