In ancient days of yore, when blogging was relatively new, we did a lot of quizzes just to be doing things; but they are rare these days. 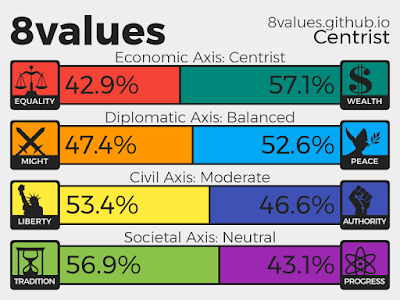 Of course, with any sort of centrist designation, it is always difficult to tell whether it indicates an actual position in the center or a position that is not easily measured on the scale. I had several Neutral/Not Sure answers, usually because I thought the question too vague. And the Equality/Wealth numbers are heavily affected by the strength of my opposition to communism as a political ideology. (I think it is in practice at least as bad as fascism. I also think it's an error, tempting as it may be, to treat capitalism as the opposite of communism, an opposition that requires treating communism as labor-ism. It's unsurprising that communists do tend to put themselves forward as the champions of Labor over Capital, but this characterization doesn't survive any serious analysis, I think. The opposite of modern communism is something for which we have no definite name, a society in which people are not reduced to their political-economic role, one based on ethical principles rather than economic plans and in which civic friendship and shared traditions matter more than means of production.)
Posted by Brandon at 1:55 AM