The Hospitality of Abraham 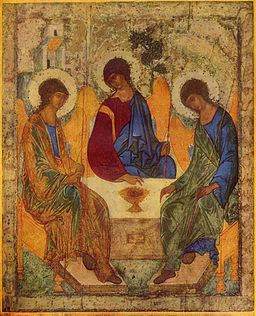 Without any doubt this is the most famous Trinity-themed icon in the world, Andrei Rublev's fifteenth-century Hospitality of Abraham and Sarah, also called, more loosely, the Rublev Trinity. The actual image is not of the Trinity but of the curious story of the theophany at Mamre, found in Genesis 18:

The Lord appeared to Abraham near the great trees of Mamre while he was sitting at the entrance to his tent in the heat of the day. Abraham looked up and saw three men standing nearby. When he saw them, he hurried from the entrance of his tent to meet them and bowed low to the ground.

He said, "If I have found favor in your eyes, my lord, do not pass your servant by. Let a little water be brought, and then you may all wash your feet and rest under this tree. Let me get you something to eat, so you can be refreshed and then go on your way—now that you have come to your servant."

So Abraham hurried into the tent to Sarah. "Quick," he said, "get three seahs of fine flour and knead it and bake some bread."

Then he ran to the herd and selected a choice, tender calf and gave it to a servant, who hurried to prepare it. He then brought some curds and milk and the calf that had been prepared, and set these before them. While they ate, he stood near them under a tree.

It goes on further, since the story includes the destruction of Sodom. The remarkable thing about the story is that it is expressly said in its very first sentence to be an appearance of Jehovah. The story tells us that the Lord appeared to Abraham. But what happens is that Abraham looks up and sees three men. He welcomes them hospitably and gets into a conversation with them; but as he does so he seems to be talking to God. One of the three, in fact, is identified in the story as the Lord, and the other two are called angels. The two are, in fact, the angels who destroy the Cities of the Plain; but, again, the distinction between them and the Lord in places becomes difficult to see. It became common because of this to see the Hospitality of Abraham as a type or symbol of the doctrine of the Trinity. As Augustine put it (De Trin 2.11.20):

That place of Scripture demands neither a slight nor a passing consideration. For if one man had appeared, what else would those at once cry out, who say that the Son was visible also in His own substance before He was born of the Virgin, but that it was Himself? since it is said, they say, of the Father, "To the only invisible God." And yet, I could still go on to demand, in what manner "He was found in fashion as a man," before He had taken our flesh, seeing that his feet were washed, and that He fed upon earthly food? How could that be, when He was still "in the form of God, and thought it not robbery to be equal with God?" For, pray, had He already "emptied Himself, taking upon Him the form of a servant, and made in the likeness of men, and found in fashion as a man?" when we know when it was that He did this through His birth of the Virgin. How, then, before He had done this, did He appear as one man to Abraham? or, was not that form a reality? I could put these questions, if it had been one man that appeared to Abraham, and if that one were believed to be the Son of God. But since three men appeared, and no one of them is said to be greater than the rest either in form, or age, or power, why should we not here understand, as visibly intimated by the visible creature, the equality of the Trinity, and one and the same substance in three persons?

The reason the Hospitality can be seen as symbolic of the Trinity is that it is taken to be a pre-incarnational manifestation of the Divine Word. Justin Martyr gives an earlier version of the standard Christian interpretation of the story in his Dialogue with Trypho (ch. 56):

Moses, the blessed and faithful servant of God, declares that the one who appeared to Abraham under the oak in Mamre is God, sent with the two angels in his company to judge Sodom, by another, who dwells eternally in the heavenly places, invisible to all and engaging in converse with none; the one whom we believe to be the Maker and Father of all things.

We find this, for example, in Hilary of Poitiers (De Trinitate 4.27):

Afterwards three men stand by him; he worships One and acknowledges Him as Lord. After this worship and acknowledgment by Abraham, the One promises that He will return hereafter at the same season, and that then Sarah shall have her son. This One again is seen by Abraham in the guise of a man, and salutes him with the same promise. The change is one of name only; Abraham's acknowledgment in each case is the same. It was a Man whom he saw, yet Abraham worshipped Him as Lord; he beheld, no doubt, in a mystery the coming Incarnation. Faith so strong has not missed its recognition; the Lord says in the Gospel, Your father Abraham rejoiced to see My day; and he saw it, and was glad.

Manifesting Christ, it indirectly manifests the Trinity, enigmatically, as in a reflection and a mystery.
Posted by Brandon at 4:20 PM