* The Max Planck Institute recently ran a Chinese physics issue, on the cover of which they wanted to place a classical Chinese poem. The Chinese that they actually put on the cover, however, turned out to be a handbill for a strip club.

Did the Republic of Letters Ever Exist? (PDF), by Jean Boutier

Closed Circles or Open Networks?: Communications at a Distance During the Scientific Revolution (PDF), by David Lux and Harold Cook

Reframing Sacred Values (PDF), by Scott Atran and Robert Axelrod (This is related to research recently discussed at Not Exactly Rocket Science)

* Will Thomas at "Ether Wave Propagation" discusses a responsibility of historical work, which he calls 'consolidation of gains':

By consolidation, I mean the retention of pertinent facts and arguments, the leaving behind of details, and the use of references to indicate the existence of those details. The consolidation of gains is necessary, simply because the weight of primary material and the proliferation of secondary material has changed the nature of scholarship.

* A calendar of twelve theorems by women mathematicians.

* Some SSRN finds:
Eric Schliesser, Philosophy and a Scientific Future of the History of Economics
Robert I. Mochrie, Justice in Exchange: The Economic Philosophy of John Duns Scotus
Georges Brugues, Toward an Economic Theory of Philosophy: An Interpretation of Lucian's Satire on Philosophy
James Halteman, Is Adam Smith's Moral Philosophy an Adequate Foundation for the Market Economy?
Carlos Hoevel, The Fiscal and Tributary Philosophy of Antonio Rosmini

* Volapük lessons. And the New Testament in the same. And Johann Martin Schleyer's original text on it.

* Hermann Dooyeweerd's A New Critique of Theoretical Thought has been put online in PDF, in two parts: Volumes I-II, Volumes III-IV. The first part is a fairly large file. (ht)

* Enigman muses on the philosophy of mathematics.
Posted by Brandon at 3:00 PM No comments:

How do we know that objects continue to exist when we aren't perceiving them? I've always liked Lady Mary's way of putting the matter: 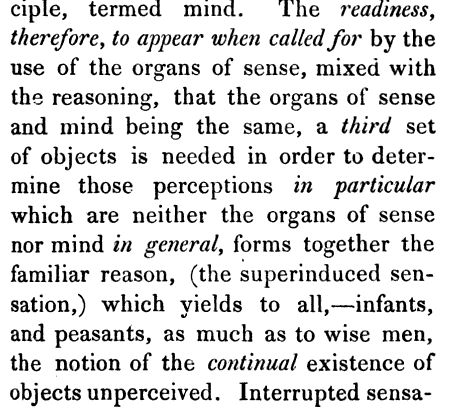 Essays on the Perception of an External Universe And Other Subjects Connected with the Doctrine of Causation. By Lady Mary Shepherd,. By Mary Shepherd

Of course, this requires an account of causation that allows us to go beyond experience, which some empiricist approaches would reject. But there are reasons for rejecting such approaches, anyway.
Posted by Brandon at 12:00 PM No comments:

There are seven degrees or orders of spiritual functions, as is plainly handed down by the writings of the holy Fathers and is shown by the example of our head, namely, Jesus Christ. He exhibited the functions of all in himself and left to his body, which is the Church, the same orders to be observed....

In the sacrament of the sevenfold Spirit there are seven ecclesiastical degrees, namely, doorkeeper, lector, exorcist, acolyte, subdeacon, deacon, priest; all, however, are called clerics, that is, those chosen by lot.

Deacons and priests, of course, are generally known; the minor orders, however, are less known, in part because usually in the West their functions were folded back into the others after Vatican II by Paul VI (although there are, in fact, still places that have papal permission to use them, for historical reasons). In effect, porters, lectors, and acolytes exercised special diaconate functions, and could usually be considered specialized subdeacons; for practical purposes, subdeacons were usually treated in the West as a major order, but sacramentally they were simply assistants and not ordained in the strictest sense, but only in a looser sense. (Minor orders are not sacramental because they are not in any way instituted as signs by Christ Himself, nor are clearly apostolic in the way the diaconate is, but are only for the convenience of the Church.) You will notice that Lombard assumes they are all sacramental; this was a common, although I don't think universal, opinion in the Middle Ages, but prior to the late Middle Ages we often find broad and narrow meanings of 'sacrament' jutting side by side without anyone noticing the distinction, so it's sometimes difficult to pin down which they mean. Eastern Catholic Churches have slightly different minor orders.

I was struck by the 'sevenfold Spirit' comment, which actually makes sense, and I think it shows some of the attraction of this scheme of the seven orders: it represents in clear form the fact that Holy Orders is the "sacrament of the sevenfold Spirit". It would probably make more sense to think of this in terms of a sevenfold ministry rather than seven degrees of a sacrament. When Paul VI suppressed the minor orders he argued that such a suppression would make more clear the nature of the priesthood itself:

This arrangement will bring out more clearly the distinction between clergy and laity, between what is proper and reserved to the clergy and what can be entrusted to the laity. This will also bring out more clearly that mutuality by which "the universal priesthood of believers and the ministerial or hierarchic priesthood, though they differ from one another in essence and not only in degree, are nonetheless interrelated: each of them in its own special way is a sharing in the one priesthood of Christ.'

It's pretty clear what he means by saying that it will make the distinction between laity and clergy more clear; his other reason is less clear, but in context appears to mean that without minor orders the laity have more room for involvement in the non-sacramental aspects of the liturgy. This would also fit with the fact that we are talking about Paul VI, who is often misread because people keep missing the fact that he is a very practical thinker, and is never merely stating things but proposing schemes and strategies. So, for instance, Humanae Vitae is almost universally misread as if it were simply stating that contraception is wrong; but the primary point of Humanae Vitae is explicitly to lay out a plan for a more marriage-friendly society, a point that has been ignored by conservative and liberal Catholics alike. (Sometimes it seems like this is virtually part of the definitions: liberal Catholics are those who ignore both the doctrinal and pastoral parts of papal encyclicals, and conservative Catholics are those who accept the doctrinal parts but ignore the pastoral parts.) And here we see Paul VI in his usual chessmaster mode, always using one move to contribute several things to a larger strategy.
Posted by Brandon at 3:28 PM No comments:

Seventh Day of the Month

I'm back, having had a great time. But I'm a bit exhausted, so there won't be any serious posting today. Instead, I'll follow through on a Siris tradition: reviewing the year just finished by linking to the posts that happened to fall on the seventh day of each month.

Pointing Out an Argument about Truth

May: Three New Poem Drafts and a Re-Draft

August: The Decalogue as an Outline of Friendship

September: Experience and the Presidency

The Angel in the House

That does seem fairly representative; a lot of link posts and poem draft posts, which tend to go up when I'm in a long stretch of being busy, or away from my computer a lot.
Posted by Brandon at 1:23 PM No comments: