One of the major disputes of medieval Jewish philosophy was over the status of terms -- 'knowledge' was the major one -- that could be applied to God; it is, indeed, partly through the influence of Maimonides that this became an issue for Christians as well. Maimonides had argued that terms like 'knowledge', when applied to both God and creatures, are equivocal, homonymous. This raised some questions, and Gersonides, far more of an Aristotelian, later argued that this is impossible (his criticism of Maimonides is far more severe than, say, Aquinas's); he argued that since we must be affirming or denying something of God, and not just playing with names, we must say instead that terms like 'knowledge' are said of God and creatures by way of priority and posteriority, i.e., analogically. This in turn receives a critical response from Hasdai Crescas, who provides an interesting argument for it:

Thus he goes on to argue that Rabbi Moses, not Rabbi Levi, was right: names and terms like 'knowledge' apply to God and creatures equivocally. This does not, as he points out, mean that there is nothing about the term that applies analogically -- negative terms can be analogical, and positive terms can be analogical to the extent that they are re-interpreted as negative, so that 'non-ignorance' is said of God and creatures by priority and posteriority. But positive terms like 'knowledge', insofar as they really are positive, are applied only equivocally.

It's interesting that on the same essential topic (due to the fact that Maimonides is a shared influence, there are even overlaps of argument), the big dispute among Christians about positive terms said of God and creatures is chiefly whether they are analogical or univocal; whereas the big dispute among Jews is chiefly whether they are equivocal or analogical. Likewise, it's interesting that Christians who argue that the names can be univocal do so in order, as they see it, to save reasoning about God, while Jews who argue that the names are equivocal do so in order to break the same. Crescas is quite clear about this; he says that Maimonides argues for equivocity in order to refute philosophical deviations from Torah on such subjects as whether God knows particular, future, or contingent things: "For the foundation of all these doubts is the analogy between His knowledge and our knowledge" (208). The idea is to argue that we cannot conclude anything about God's knowledge based purely on reasoning from our own knowledge, except the pious conclusions that it's inappropriate to call God ignorant, and that, whatever it may be, God's non-ignorance has to be better than our non-ignorance.

A Scale of Awful Notes

From Low to High Doth Dissolution Climb
by William Wordsworth

From low to high doth dissolution climb,
And sink from high to low, along a scale
Of awful notes, whose concord shall not fail;
A musical but melancholy chime,
Which they can hear who meddle not with crime,
Nor avarice, nor over-anxious care.
Truth fails not; but her outward forms that bear
The longest date do melt like frosty rime,
That in the morning whiten'd hill and plain
And is no more; drop like the tower sublime
Of yesterday, which royally did wear
His crown of weeds, but could not even sustain
Some casual shout that broke the silent air,
Or the unimaginable touch of Time.

Posted by Brandon at 8:23 PM No comments:

Christianity and the Fantasy Genre

D. G. Myers recently argued that Fantasy is a Genre of Christianity, and E. D. Kain suggests that instead it is perhaps a phenomenon specific to the Anglosphere. Initially, of course, this seems all wrong: the fantastic is found all over the place, and there's no obvious reason why a Jewish fantasy author couldn't exist. It's actually pretty easy to find fantasy authors who were at least raised Jewish, for instance. But this, of course, was never the issue; it's not about the authors, but about the genre. Likewise, 'the fantastic' is too broad a category to be a literary genre -- indeed, so broad that taking it simply to be the fantasy genre will get us quickly into rather dimwitted conclusions. (I find some of the responses to Myers to be amusing in this way: People, Hindus did not write the Mahabharata to be fantasy literature, and they don't typically read it that way, without at all needing to deny that there are fantastic elements in the story. Euripides didn't write plays about gods and heroes because he wanted fantasy; he wrote them because he wanted the kind of religious play called a tragedy. And so on and so forth. There can be all sorts of fantastic elements without anyone either writing or reading a work of fantasy. Considerably better but still a bit short, I notice that people bring up anime quite a bit, but early anime consists of educational films, government propaganda, and folktales -- and the mere iteration of a folktale is not a fantasy work, but a retelling of an old story. The history since then has been an intensely complicated interaction between Western tropes and Japanese traditions. And, likewise, the use of Christianizing images in anime in order to create a fantastic atmosphere, while not universal, is widespread enough to be famous. So much more fine-grained analysis is needed in order to make this a plausible counterexample.)

I think at least a limited sense can be made of both suggestions, but Myers's suggestion is easier to see. Genealogically, at least, the sort of fantasy genre we get in the English-speaking world is arguably what Christianity does to paganism. It starts early -- think Beowulf or medieval adaptation of Greek and Roman stories -- and spreads through romances and fairy tales, and so on and so forth. For Anglophone fantasy is not just stories about fantastic things; much of it, perhaps the greater part of it, is making up pagan mythologies and legends, not for any religious reason, but simply for the enjoyment of it. One's reminded of Chesterton's lines in The Ballad of the White Horse:

"Ere the sad gods that made your gods
Saw their sad sunrise pass,
The White Horse of the White Horse Vale,
That you have left to darken and fail,
Was cut out of the grass.

"Therefore your end is on you,
Is on you and your kings,
Not for a fire in Ely fen,
Not that your gods are nine or ten,
But because it is only Christian men
Guard even heathen things."

Regardless of whether it's true elsewhere, this is virtually the motto of much of the monumental fantasy of the past century or so -- MacDonald, Chesterton himself, Lewis, Tolkien, and so forth. Many of the standard tropes of fantasy are at root paganism filtered through Christianity, even if they are further filtered through other things. Not just Anglo-Saxon mythology, as Kain suggests, but Icelandic, Norse, and Greco-Roman as well. Nothing about this requires that you be Christian in order to enjoy or write fantasy; but the fact that there is a fantasy genre is due, one might say, to Christians cutting the White Horse out of the grass long after it had ceased to have its original religious significance. Fantasy being as diverse as it is, there are certainly other strands. But whatever limitations are to be placed on it, one certainly can make sense of saying that fantasy is a Christian genre. Certainly Judaism, as such, is in opposition to paganism, and resists assimilating it, to a far greater degree than Christianity; it really does boggle the mind to think what a fantasy genre with purely Jewish roots could possibly be. Jewish folktales are possible, but as I noted above, people don't tell folktales as fantasy,and making the fantasy genre so broad that it includes folktales as one subgenre makes it a useless label -- it makes fantasy almost coextensive with storytelling, since completely nonfantastic stories are the minority, the unusual case, not the norm.

The Golem of Prague and the Jewish Aversion to Fantasy
The Difference Between Fantasy and Sci Fi
Posted by Brandon at 10:25 PM 2 comments:

Today is the feast of one of the greatest minds in Western history, Bl. John Duns Scotus. 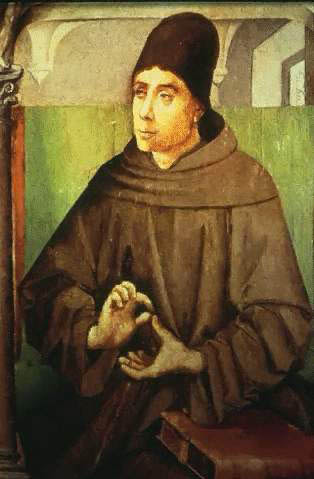 Thou hast a base and brickish skirt there, sours
That neighbour-nature thy grey beauty is grounded
Best in; graceless growth, thou hast confounded
Rural rural keeping—folk, flocks, and flowers.

Yet ah! this air I gather and I release
He lived on; these weeds and waters, these walls are what
He haunted who of all men most sways my spirits to peace;

Of realty the rarest-veinèd unraveller; a not
Rivalled insight, be rival Italy or Greece;
Who fired France for Mary without spot.

Virtue and Its Recognition

I'll slowly be putting up rough draft chapters at http://scion-of-lykaios.blogspot.com/. While I'll be writing every day, I'll only be posting as chapters are finished.

A bit tough getting this out, despite being a purely transitional chapter in which nothing much apparently happens; I'm trying to plant seeds of things that will eventually become of importance, but it's difficult to do this well on the fly. Also, I spent some time thinking through and roughly working out how this will all end, and think I have something worthwhile; we'll have to see how it turns out when I eventually put that chapter up, in its proper place. Also, I have been busy. Right now it's at about 4500 words, which means there's room to doubt that it will end up at the 50000 word mark by the end of November, but this might be more of a novella story anyway. Still, we'll see; there are at least two important secondary characters who haven't even shown up yet.
Posted by Brandon at 5:10 PM 2 comments:

Some Links of Note

* Eric Schwitzgebel considers a puzzle about materialistic accounts of consciousness in Is the United States Conscious?

* Kirsten Walsh on the aims of Newton's natural philosophy.

* Humphrey at "Quodlibeta" looks more closely at Pinker's claims about the An Lushan revolt.

* Beth looks at the links between Benedict XVI's environmental theology and his rejection of many themes in feminist theology. This is very noticeable if you read many of his speeches and writings on ecological issues, and it's good to see someone looking at it more closely.

* Miriam Burstein reviews Himmelfarb's The People of the Book

* A discussion of various theological themes in The Lord of the Rings.