Lady Mary Shepherd, An Essay Upon the Relation of Cause and Effect, pp. 171-172:

Now Mr. Lawrence contradicts at once his own arguments for materialism, as well as nature, and fact; when he says (tauntingly) "thus we come to diseases of an immaterial being! for which suitably enough moral treatment has been recommended," inferring thereby the absurdity of moral treatment to a material mind.

Now moral treatment, according to his own notion of only a material capacity for thought, might still be proper, as it would still act on the material capacity for thought,--and though "arguments, syllogisms, and sermons" might not reach it, of an ordinary kind; yet, the persuasions of friendship; the influence of beauty, and of love; the pleasures of social intercourse; the calm discussions of reason; scenes that please the imagination, or enchant it, will reach it, and do. Nevertheless all this is "moral treatment," and which yet requires the brain and nervous system.

The passage from Lawrence's lectures in context: 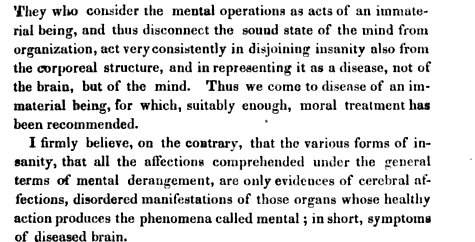 Lectures on Physiology, Zoology, and the Natural History of Man Delivered at the Royal College of Surgeons By William Lawrence

I take it that Lawrence's primary point here is that it makes no sense to talk of "diseases of the mind" when 'mind' is an immaterial being; but Lawrence does go much farther, as we see when we turn to the conclusion he draws from this, in the "arguments, syllogisms, and sermons" passage:

Lectures on Physiology, Zoology, and the Natural History of Man Delivered at the Royal College of Surgeons By William Lawrence

But on Lawrence's own materialist principles, it is impossible to draw the line between moral and medical treatment as sharply as Lawrence does here; and Shepherd makes the point very clearly, I think, in the above passage.
Posted by Brandon at 8:44 PM