A famous passage from Thomas Reid: 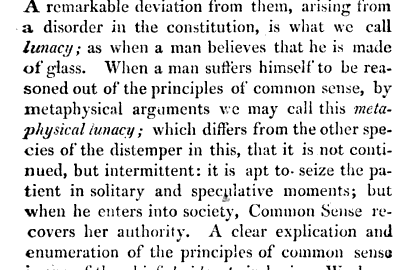 An inquiry into the human mind, on the principles of common sense By Thomas Reid

However, it is closely related to a common argument against skepticism, namely, the apraxia objection, the argument that skepticism would make practical life impossible. This bothered Hume enough to consider the matter; and we find the answer in Treatise 1.4, especially (but not exclusively) in 1.4.7. Reid's diagnosis is interesting in that it is a diagnosis of skepticism derived from Hume, the person who, for Reid, is almost a paradigm example of a skeptic. In making this diagnosis, Reid is simply building on Hume's own diagnosis of the situation, since Hume makes the same diagnosis, calling it a "philosophical melancholy and delirium" and also regards it as intermittent, dissipating on exposure to society. Thus it is important to note that you can be a skeptic and agree with Reid's diagnosis; Hume is the prime example, since, in fact, Reid's diagnosis is simply taken from Hume.
Posted by Brandon at 9:37 AM