Will Wilkinson has an interesting post worth reading on Jonathan Haidt's analysis of the difference between liberals and conservatives. I'm not actually thoroughly convinced that Haidt has made his moral-sentiments research map adequately onto his liberal/conservative research, but it's an interesting idea and worth supposing for the sake of argument. The basic idea is that while liberals appeal to two dimensions of moral evaluation (harm and fairness), conservatives appeal to five (harm, fairness, in-group, authority, and purity). In any case, I find it interesting because it would be one of the few measures by which I fall clearly and unequivocally on the 'conservative' side of the spectrum. While I fully understand arguments that they need to be kept under tight restraint (they often do) or that they are misapplied (they often are), my mind thoroughly boggles at the idea of people who deny that loyalty (a.k.a., in-group) and deference (a.k.a., authority) "count as moral at all." (I set aside purity, because I fully understand people not getting that one. To make a purity work as a moral category, you need the idea that people can exert a morally corrosive influence on another, and, even more, that you can be exerting such an influence, or be receiving such an influence, completely independently of any intention you may have or deliberate choice you may make. Even if conservatives, drawing from tradition, are more likely to use inferences that fit this, I suspect that by and large you'd find that conservatives have as difficult a time with this notion as liberals, and would rarely accept it if put to them baldly like that. And, of course, it's easy enough to find cases that make a lot of sense under this category -- racism, sexism, anti-Semitism, and the like as impurities or corrosive biases -- which at least some conservatives would bend over backward not to put under it.)

In any case, as I've noted before, another thing that interests me about this whole thing is that Haidt's five topoi or dimensions of moral sense are independent rediscoveries of a moral classification that was discovered by William Whewell in the nineteenth century: 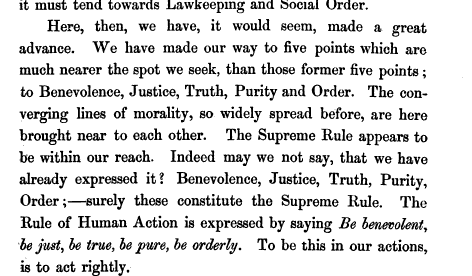 ('Truth' may seem an odd man out, but Whewell sees the moral value of Truth as the foundation of a community, because it is the foundation of any particular form of communication, by which a group is bound together.) The classification is not precisely Haidt's, but the differences are so much just a matter of variation in details that it is striking. And indeed, it occurs to me that this may have been one element in the great battle in the nineteenth century between intuitionists (like Whewell) and utilitarians (like Mill), since it does seem that a Mill-style utilitarianism would be congenial to the view that morality can be summed up by nonmaleficence and reciprocity. Which makes me wonder if Haidt might not be picking up on some enduring remnant of a divide in Victorian-era moral views.
Posted by Brandon at 7:54 AM