Miriam has a nice comment at her blog on the distinction between hypocrisy, and 'Bulstrodism' (as shown in Eliot's Middlemarch):

"There may be coarse hypocrites, who consciously affect beliefs and emotions for the sake of gulling the world, but Bulstrode was not one of them. He was simply a man whose desires had been stronger than his theoretic beliefs, and who had gradually explained the gratification of his desires into satisfactory agreement with those beliefs." (Middlemarch, ch. LXI)

The hypocrite, according to GE's definition, is a self-conscious actor who knows that his practices and his principles are at odds; he deceives others, but not himself. That element of self-conscious performance is missing from Bulstrode's career, because he really has convinced himself that his behavior conforms to Christian standards (a conviction increasingly under pressure by the end of the novel, of course). He isn't "acting" like a Christian, but genuinely thinks that he is one. Which is why there's such emotional heft to Bulstrode's eventual collapse: he loses the fiction of self-righteous identity that he has constructed for himself, and thus realizes that his own self is actually a sham. In GE's terms, had Bulstrode been a hypocrite, only the public image produced for others would have been at risk.

In any event, I think that a lot of what gets written off as hypocrisy--especially religious hypocrisy, but political hypocrisy as well--is really Bulstrodism.

This is a great distinction (and one small example of why moral philosophers who don't read George Eliot should hang their heads in shame). This theme is closely related to the very difficult and tangled problem of moral self-deception; certainly Bulstrodism is a form of self-deception in a way that 'coarse' hypocrisy is not. Bulstrodism, in fact, sounds very similar to Butler's account of self-deceit: 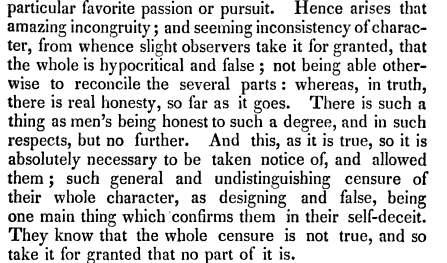 People think Bulstrode a hypocrite, but Bulstrode faced with the charge of hypocrisy can dismiss it out of hand: obviously he's not a hypocrite, because he is entirely sincere -- 'honest', as Butler says. It's a casuistical honesty. Bulstrode's rationalizing of his handling of the Raffles affair is a masterpiece of casuistical self-deception: 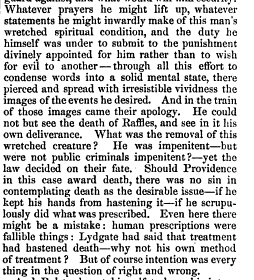 Middlemarch A Study of Provincial Life By George Eliot

But it's honest. And, what is more, it is all through a form of moral reasoning: Bulstrode really does care what's right and what's wrong, and he carefully thinks it through. He just always manages to think things through until he has put himself in the right.
Posted by Brandon at 12:08 PM