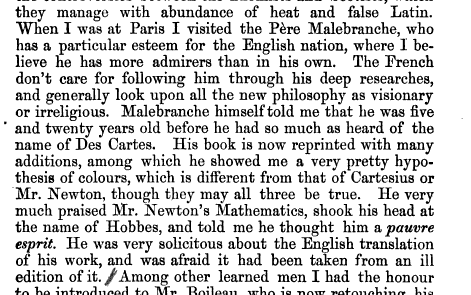 (1) Addison's comment that Malebranche may have had more admirers in England than in France. This is actually quite important, because there is something to be said for it. I may say something on this at some point; Malebranche has a major influence on British philosophy in the period.

(2) The claim that Malebranche, arguably the most widely read Cartesian of his day, didn't know anything about Descartes until relatively late is consistent with what we know from other sources. There is good reason to think that Malebranche first read Descartes (the Treatise on Man) when he was twenty-six.

(3) It's interesting to find Malebranche praising Newton's mathematics; Malebranche was a major figure (organizationally rather than mathematically) in the spread of the calculus in France.

(4) The distaste for Hobbes fits very well with Malebranche's scattered comments about him.
Posted by Brandon at 5:56 PM