Mill talks about worthiness elsewhere, in his argument against the ethics of Auguste Comte. The problem with the ethics of positivism, Mill suggests, is that it rejects the view that "between the region of duty and that of sin there is an intermediate space, the region of positive worthiness." Instead, Mill says, we should identify a standard of altruism that is obligatory but that allows for supererogation, a meritorious region beyond the call of duty; and he has an interesting argument that utility requires such a supererogatory region: 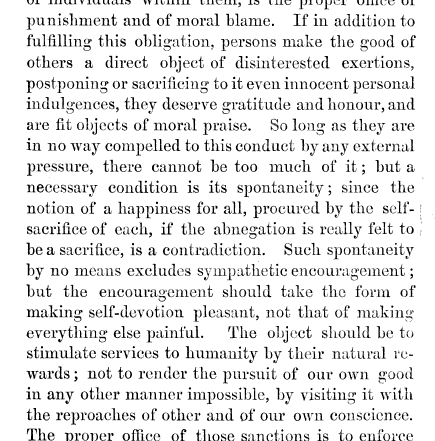 So the greatest happiness requires that beyond the obligation there may be room for people to do goodness spontaneously and without subject to demand. Mill does hold that as time goes on the region of moral duty expands, through promise and reasonable expectation, so that virtue that once was uncommon becomes common; but there has to be space between duty and sin.

Mill goes on to connect this argument with what has to be one of the only unequivocal affirmations of the value of Catholic casuistry in nineteenth-century England: 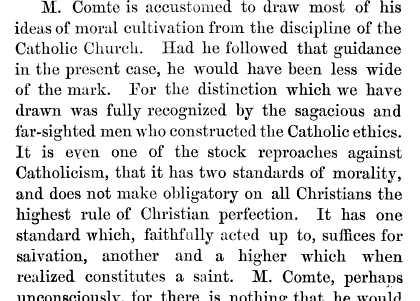 What is perhaps more interesting is that this criticism of Comte is clearly related to the criticisms found elsewhere of intuitionists and Benthamite utilitarians. We should cultivate personal enjoyments, and rather than placing the "moralization" of these enjoyments in the demand that everyone else enjoy them as well, we should instead place it in "cultivating the habitual wish to share them with others, and scorning to desire anything for oneself which is incapable of being so shared." The Benthamites treat the moral aspect of human life, i.e., duty as if it were the only one of importance; the intuitionists have (according to Mill) no principle for anything that is not morality in the strict sense; and the positivists allow no space between duty and sin. Mill insists against all three that the importance of free and voluntary moral cultivation (in the broad sense of 'moral') of one's own worthy enjoyments and tastes is an essential part of human life, and recommends his own version of utilitarianism against all three on the grounds that it takes this into account. This appears primarily to be aesthetic for Mill, in all three contexts; but it's clear from the discussion of Comte that it is not merely so, since morally heroic action is clearly taken to be an unusually great form of worthiness. There's a sense in which good taste is for Mill always moral taste; the difference between it and morality in the strict sense being that its normative force is weaker (things pertaining to morality in the strict sense are obligatory, while things pertaining to good taste are worthy of being done, although optional). While the precise form in which he deploys this idea against his opponents varies somewhat, it does seem to be a consistent theme in Mill, and is arguably one of the more important features of his system, since it is here that he places much of the superiority of his own approach over its major rivals.
Posted by Brandon at 9:26 AM