An interesting passage from Berkeley's Siris: 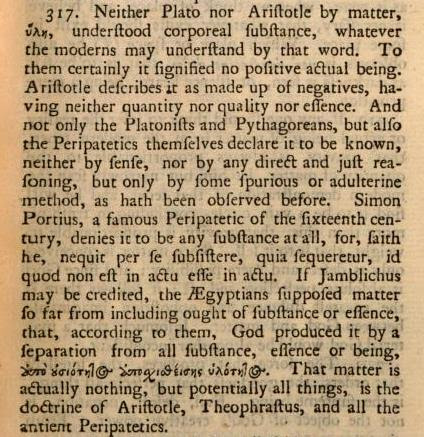 Siris A Chain of Philosophical Reflexions and Inquiries Concerning the Virtues of Tar Water, and Divers Other Subjects Connected Together and Arising One from Another By George Berkeley, G. L. B. O. C., Thomas Prior

According to Berkeley, Plato and Aristotle are plausibly read as idealists (or is it rather that Berkeley is plausibly read as an intellectual descendant of Plato and Aristotle?). People who have never read in Berkeley beyond the limited selection of texts that come up in undergraduate philosophy classes completely overlook this side of him; this passage comes in the midst of a long argument attempting to show that his own position is consistent with Plato, Aristotle, and "the Aegyptians", a move that is more suggestive of the prisca theologia of Renaissance Neoplatonism than of Lockean empiricism. And that's not surprising: Berkeley is, in fact, closer to Neoplatonism than anything on every point except his empiricism. The empiricism has the interesting effect of qualifying his Neoplatonism -- whenever it comes up he makes fairly clear that it is approximate and speculative. But it doesn't shut it down.
Posted by Brandon at 10:18 AM