Interesting; I've come across a clear case of a Samuel Clarke-style account of right and wrong, in Joseph Haven's 1859 Moral Philosophy. The account is undeniably Clarkean, at least in a broad sense, since the terms in which it is put are familiar to anyone who has read Clarke: 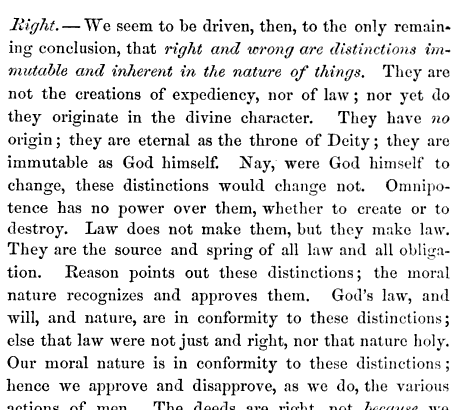 What is remarkable is that the argument as a whole for this conclusion is very similar to the state of the argument as it had existed an entire century before -- utility gets a stronger showing than it would have previously, as one would expect, but divine command theory is actually more or less correctly formulated along eighteenth century lines, and the arguments used largely make a showing already in the eighteenth century. It is somewhat surprising to find the terms of the debate so clearly revived a century after the debate itself. It does fit with Haven's eclecticism, I suppose; but it takes on some interest in that Haven was a major influence on an entire generation of American philosophers.
Posted by Brandon at 11:33 PM