I've been teaching Plato's Gorgias, as I usually do in my intro courses. (The Gorgias is my favorite Platonic dialogue. It's well nigh perfect, having a little bit of most of what you might like about Plato in a discussion that is beautifully constructed.) And as usual I'm surprised by how many students are completely certain that Callicles is right, who are willing to affirm that the strong and intelligent have a right by nature to take what they please, and that this is only reined in by the fact that if such people go too far, everyone else will gang up on them. This happens every time we get to Callicles' major speech, and yet somehow it takes me by surprise every single time. I guess I just have difficulty wrapping my mind around the idea that there are a great many ordinary and apparently decent people who, if faced with the question of whether might makes right, will look at you as if you had asked something odd and reply: Yes, obviously it does. 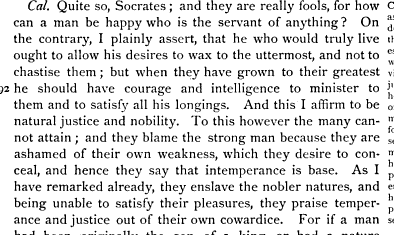 And they are, of course, one entirely normal expression of our society. What, honestly, do we do that does not make it seem natural for people to let their desires expand as much as possible? How much time do we really spend praising prudence rather than native intelligence, or self-control rather than ambition, or humility rather than bold self-assertion? What do we really do to convey the idea that self-restraint is not a necessary evil but a positive good? Very little. And the result is inevitable: if you teach like Gorgias, you end up with Callicles.
Posted by Brandon at 10:22 PM