As you may well know, Coleridge thought of himself as not merely a poet but as a philosopher-poet, or, perhaps even more accurately, a poet-philosopher. Philosophy was extraordinarily important to him, and he devoted an immense amount of effort to it in its own right. And so, while his most famous pieces are usually not obviously philosophical in character many of his poems are, and some of them are quite beautiful in their own right.

Unfortunately, while time does not wear so terribly on poetry as it does on the human frame, it does wear, and this is very noticeable in one of his better short philosophical poems. The poem itself is extraordinarily well done, unifying the poetic and the philosophical, playing on a wide variety of images and ideas in a few brief lines, every word flawlessly chosen -- at the time. I speak of "Reason," which originally was published as a poetic answer to a philosophical question at the end of his work on the constitution of the church and state. Today you could not read it to undergraduates (and many who are not undergraduates) without much snickering. 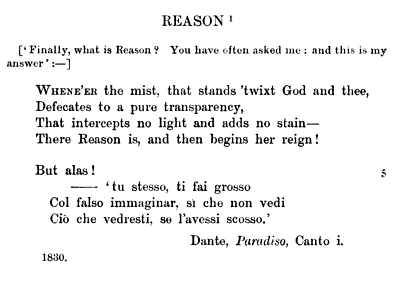 'Defecate' was originally an alchemical term: it meant the chemical process of removing detritus and impurities from a substance, eliminating things associated with decay. It was sort of the reverse of (alchemical) fermentation: to ferment was to corrupt or cause to decay and to defecate was to remove the decay so created. It's in the word itself: feces meant the unusuable dregs, de- indicates removal, and so we have defecation, the removal of the unusable dregs. Through a kind of nicety it was applied to our biological process of removing unusable dregs; through long use in this way it came to mean only that; and so a brilliant answer to a question became almost inaccessible to most readers by acquiring scatological associations.

...you yourself make yourself stupid
with false imagining, so that you do not see
what you would see if you had shaken it off.

The poem, which once answered the question "What is Reason?" and then told us the most serious impediment to attaining it, has now become a demonstration of the problem in its own right. To get to the insight of the poem you cannot stay with the falso immaginar which makes us read the poem stupidly. You must shake it off and see what you can only see if you do shake it off and dispel your mind's irrelevant commotion. The poem has become an example in miniature of what previously it only described. Poems have a life that extends beyond the poet's hand.
Posted by Brandon at 6:49 PM