Hume on China and Kames on Blacks

Still gathering information together relevant to the question of Hume's racism. In the comments to the infamous footnote post I noted that one puzzle with regard to the original version of the footnote was the status of the Chinese. Hume certainly knew about Chinese civilization; here's a remark in the essay on the rise and progress of arts and sciences: 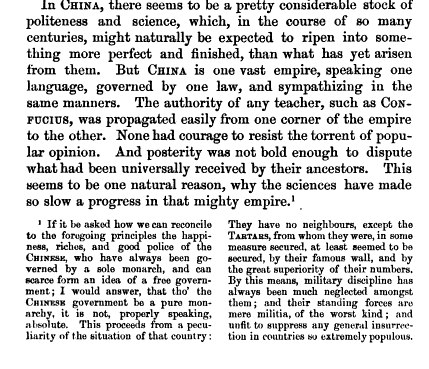 If this is in the original 1742 essay, it predates the footnote; as far as I have been able to tell from the sources I have on hand, it was in the original essay (I don't have the actual 1742 essay on hand, though; I'd have to go downtown to the library to check this). If Hume knew that the Chinese had a "pretty considerable stock of politeness and science" that means (when combined with the original footnote) that either (1) he thought the Chinese were a different branch of the same "species of man" as the Europeans; or (2) he was inconsistent. I don't know enough about early modern polygenism to say whether (1) was a position that was very likely at the time; I'll have to look up more on that. Does anyone have any suggestions for reading?

Incidentally, Kames, Hume's cousin, while he argues that blacks are a "different species from the Whites," and while he had originally thought that the "inferiority of understanding of the former" was rooted in black nature, eventually moderated his view on this second point, and came to wonder whether "inferiority may not be occasioned by their condition." The full passage: 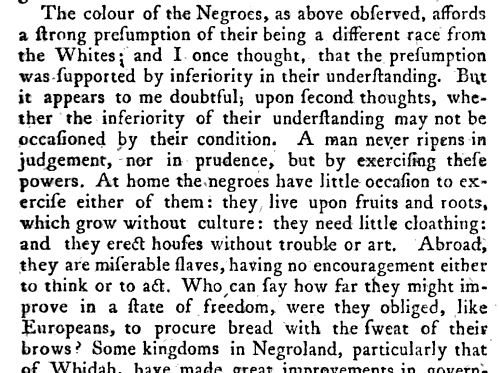 Sketches of the History of Man In Four Volumes By Henry Home, Henry Home Kames

Sketches of the History of Man was published in 1774, which means it predates the last revision to Hume's Essays. Kames doesn't say why he turned around on part of his view; his reasoning is similar to one of Beattie's arguments. But Beattie would not be satisfied by the lingering idea that blacks are inferior in understanding: he had also taken the trouble to note the fact that black slaves, despite their condition, had nonetheless shown "symptoms of ingenuity" and "become excellent handcraftsmen, and practical musicians" and that they were quite capable of learning anything they were taught; Beattie's point is that they have understanding quite as good as anyone else's, even if they were seriously impeded by whites in using it to learn things. So there's reason to think that Kames's change wasn't from Beattie.
Posted by Brandon at 11:55 AM