The Lion of Rome 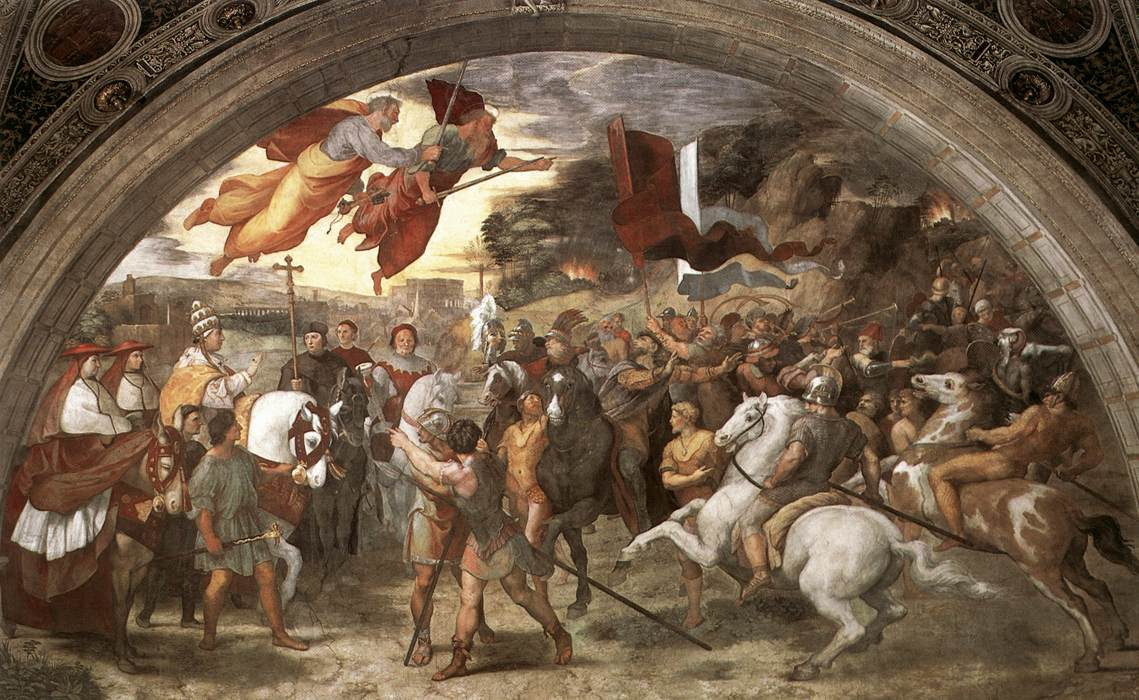 The above painting (I am using the Wikimedia Commons version) is Raphael's famous depiction of the meeting of Pope St. Leo I and Attila the Hun. This is one of St. Leo's most famous feats:


Now Attila, having once more collected his forces which had been scattered in Gaul [at the battle of Chalons], took his way through Pannonia into Italy...To the emperor and the senate and Roman people none of all the proposed plans to oppose the enemy seemed so practicable as to send legates to the most savage king and beg for peace. Our most blessed Pope Leo - trusting in the help of God, who never fails the righteous in their trials - undertook the task, accompanied by Avienus, a man of consular rank, and the prefect Trygetius. And the outcome was what his faith had foreseen; for when the king had received the embassy, he was so impressed by the presence of the high priest that he ordered his army to give up warfare and, after he had promised peace, he departed beyond the Danube.

The exact reason for Attila's turn back is unknown, and very likely there was more than one contributing reason. Attila's resources seemed to have been stretched fairly thinly by this point, so he probably was primed for a peaceable settlement that would allow him to consolidate his gains. He was also famously superstitious, and so it's possibly he was just plain awed by the liturgical panoply accompanying the Pope. But, of course, what makes it morally impressive is not the success, but the courage it must have taken. Emperor Valentinian had simply holed himself up in Ravenna; the leaders of the city cowered or fled, and Leo went out unarmed to talk the most powerful warrior in that part of the world to turn around and go home. And this was not a fluke of the time; when Genseric (or Henzerich) the Vandal approached the city a few years later, and the Emperor and the leaders of Rome fled or cowered yet again, out went Leo to see if the problem could be solved. Genseric was not going home empty-handed, so Rome was sacked for the second time in the fifth century, as the Vandals looted the city for two weeks and shipped people off to be sold as slaves. (But if Prosper is to be believed, Genseric reined in his men so that the population wasn't massacred, and only a few buildings seem to have been burned.) But it was the same force of will.

Leo's most important contribution, though, was his Tome of Leo, which was recognized by the Council of Chalcedon as a summary of orthodox Christology:

Thus in the whole and perfect nature of true man was true God born, complete in what was His own, complete in what was ours. And by "ours" we mean what the Creator formed in us from the beginning and what He undertook to repair. For what the Deceiver brought in and man deceived committed, had no trace in the Saviour. Nor, because He partook of man's weaknesses, did He therefore share our faults. He took the form of a slave without stain of sin, increasing the human and not diminishing the divine: because that emptying of Himself whereby the Invisible made Himself visible and, Creator and Lord of all things though He be, wished to be a mortal, was the bending down of pity, not the failing of power. Accordingly He who while remaining in the form of God made man, was also made man in the form of a slave. For both natures retain their own proper character without loss: and as the form of God did not do away with the form of a slave, so the form of a slave did not impair the form of God.