I rarely post any pictures of myself, but here I am, between having seen Jefferson and going to see Lincoln, making friends with Fala at the Roosevelt Memorial in Washington, D.C. 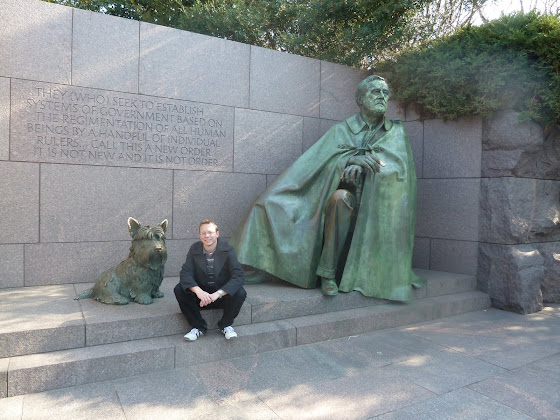 Fala was the memorable part of what became one of FDR's most famous speeches (from September 23, 1944):

These Republican leaders have not been content with attacks on me, or my wife, or on my sons. No, not content with that, they now include my little dog, Fala. Well, of course, I don't resent attacks, and my family doesn't resent attacks, but Fala does resent them. You know, Fala is Scotch, and being a Scottie, as soon as he learned that the Republican fiction writers in Congress and out had concocted a story that I had left him behind on the Aleutian Islands and had sent a destroyer back to find him--at a cost to the taxpayers of two or three, or eight or twenty million dollars--his Scotch soul was furious. He has not been the same dog since. I am accustomed to hearing malicious falsehoods about myself--such as that old, worm-eaten chestnut that I have represented myself as indispensable. But I think I have a right to resent, to object to, libelous statements about my dog.