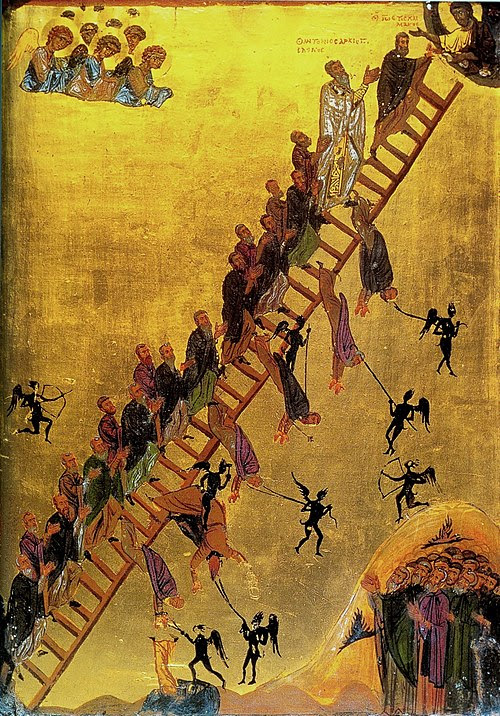 Byzantine Catholics celebrate the Sunday of John Climacus today, which I've always thought one of the more sobering ecclesiastical traditions in Lent. St. John Climacus receives his name because of his famous work, The Ladder of Divine Ascent (Klimax = "Ladder"), one of the great classics of ascetic life. The central image of the work is that of Jacob's Ladder; St. John, who lived from the late sixth century to the middle of the seventh century, uses this as an image for teaching monks about stages of spiritual discipline; he gives no less than thirty stages, beginning with renunciation of the world and ending with the high trinity of virtues (faith, hope, and love). In effect it can be seen as a discussion of thirty types of spiritual practice, arranged roughly in order of difficulty.

Climacus was a monk living in the Sinai region, and eventually became abbot of St. Catherin's Monastery; the monastery has in its possession a famous icon related to the work, dating from (I believe) the 12th century. The one above is the version of it available at Wikimedia Commons. It's quite the picture: demons are dragging monks down to hell by means of their passions, as they struggle upward to Christ under the encouragement of the angels and the saints.
Posted by Brandon at 4:05 PM