When Atheists Try to Be Clever...

...they shoot themselves in the foot. This image has been making the rounds on various atheist blogs, with the caption "When a theist starts a debate with an atheist...": 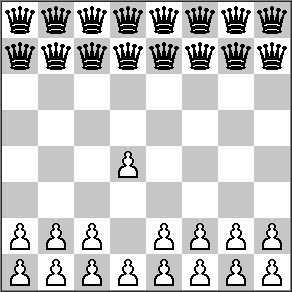 (from here). Now, setting aside the obvious fact that

(1) the joke depends on an entirely arbitrary assignment of labels to each position;

it nonetheless ends up backfiring because

(2) it is logically and mathematically impossible, given any standard rules of chess, for either side to win this game. The rules of chess require an automatic draw if there is an impossibility of checkmate -- once it is established that no legal series of moves can reach checkmate, the game is over and both sides tie. A game with no kings has no possible checkmate, and so is an immediate draw. In trying to depict with a chessboard how much better their arguments are, a task in which they had perfect freedom to choose any possible chess set-up, they still managed to give themselves an unwinnable board. In other words, the atheist player doesn't know what he's getting into: the board is rigged so that the theist, with nothing but pawns, can guarantee a draw no matter how many queens the atheist has. Diabolically clever theist, getting atheist hopes up while making it impossible for them to win! That's on standard rules. And, of course, if the rules are supposed to be nonstandard, it is impossible to know what this board even means.

The jokes write themselves.
Posted by Brandon at 7:29 PM