The Foe of Every Cruelty

Today is the feast of St. Lucy, Virgin Martyr; she is one of the saints who is often easily picked out because she is usually represented as carrying her eyes on a plate, like so: 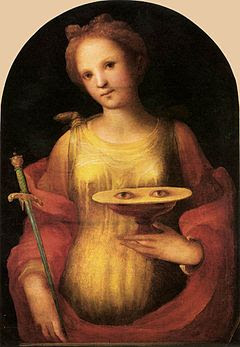 The reason is that the stories of her martyrdom tell that her eyes were gouged out during the Diocletian persecution.

She was extraordinarily popular. She has an important, although mostly offstage, role in Dante's Divine Comedy (Dante, who had eye troubles, was highly devoted to her); she is the saint that the Virgin Mary sends to Beatrice, telling her to send Virgil as Dante's guide through hell; or so we are told by Virgil himself:

" 'That Lady called on Lucia with her request
And said: "Your faithful follower has now
Such need of you that I commend him to you."

" 'Lucia, the foe of every cruelty,
Started up and came to where I was,
Sitting at the side of the aged Rachel.

" 'She said, "Beatrice, true credit to our God,
Will you not help the man who so loves you
That for your sake he left the common crowd?

" ' "Do you not hear his pathetic grieving?
Do you not see the death besieging him
On the river which the ocean cannot sway?"

She is also conspicuously mentioned in the Paradiso, where Beatrice confirms Virgil's story:

"And opposite the eldest family father
Lucia sits, who stirred your lady when
Your head was nodding downward, to your ruin."

Thus in the Mystical Rose of Heaven she is directly across from Adam.

A Nocturnall upon St. Lucie's Day, Being the Shortest Day
by John Donne


'Tis the year's midnight, and it is the day's,
Lucy's, who scarce seven hours herself unmasks ;
The sun is spent, and now his flasks
Send forth light squibs, no constant rays ;
The world's whole sap is sunk ;
The general balm th' hydroptic earth hath drunk,
Whither, as to the bed's-feet, life is shrunk,
Dead and interr'd ; yet all these seem to laugh,
Compared with me, who am their epitaph.

Study me then, you who shall lovers be
At the next world, that is, at the next spring ;
For I am every dead thing,
In whom Love wrought new alchemy.
For his art did express
A quintessence even from nothingness,
From dull privations, and lean emptiness ;
He ruin'd me, and I am re-begot
Of absence, darkness, death—things which are not.

All others, from all things, draw all that's good,
Life, soul, form, spirit, whence they being have ;
I, by Love's limbec, am the grave
Of all, that's nothing. Oft a flood
Have we two wept, and so
Drown'd the whole world, us two ; oft did we grow,
To be two chaoses, when we did show
Care to aught else ; and often absences
Withdrew our souls, and made us carcasses.

But I am by her death—which word wrongs her—
Of the first nothing the elixir grown ;
Were I a man, that I were one
I needs must know ; I should prefer,
If I were any beast,
Some ends, some means ; yea plants, yea stones detest,
And love ; all, all some properties invest.
If I an ordinary nothing were,
As shadow, a light, and body must be here.

But I am none ; nor will my sun renew.
You lovers, for whose sake the lesser sun
At this time to the Goat is run
To fetch new lust, and give it you,
Enjoy your summer all,
Since she enjoys her long night's festival.
Let me prepare towards her, and let me call
This hour her vigil, and her eve, since this
Both the year's and the day's deep midnight is.

This poem is usually thought to have been written in 1627, a year in which Lucy Donne, his daughter, and Lucy, Countess of Bedford, a close friend, both died. The reference to the 'year's midnight' is to the fact that St. Lucy's feast was at one time more-or-less the Winter Solstice (in England in Donne's day, and for quite some time before it, St. Lucy's would have been the closest major saint's day to the Winter Solstice -- you need to keep in mind, of course, the difference between the Julian and the Gregorian calendar). St. Lucy's as liturgical Winter Solstice creates an interesting series of juxtapositions given that her name is derived from the word for 'light'; exactly suitable to the poetic conceits of a metaphysical poet like Donne.
Posted by Brandon at 9:46 AM