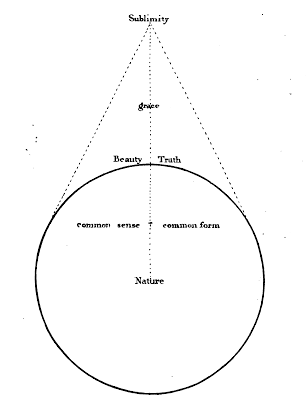 This interesting diagram is from Frances Reynolds's An enquiry concerning the principles of taste, and of the origin of our ideas of beauty, &c. (1789). Frances Reynolds was the sister of the painter Sir Joshua Reynolds, and a talented painter in her own right, although she's usually seen as lacking the development and experience of her brother. She was also a close friend of Samuel Johnson, who called her 'Renny'.

In this diagram (you can click the image for a closer view) we see the human mind placed at the center, just as each introspecting person sees himself or herself as being in some way at the center of the world. The mind springs from "inscrutable principles of nature". We have a direction of progress, finding as we do sources of illumination in the world, in which we come to partake ourselves. Thus we have a natural tendency to the boundary of nature, which brings us to "demonstrable beauty and truth, and the utmost power of rules" -- in other words, the things that order nature itself and can be represented as laws. However, chance and fortune often impede us in our progress, and most of us come to rest at a mid-point between completely uncultivated powers of mind and the natural boundary of our excellence. This is 'common sense'. Common sense is to our natural mental excellence as common form is to beautiful form or beauty. With common sense we have something more like excellence than our rude natural beginnings, but it is mixed with a sort of mediocrity. If they attain to demonstrable beauty and truth, however, the intellectual powers may yet continue to rise upward -- Reynolds says they undulate like a flame -- through grace, to the upmost pinnacle of sublimity. In a sense we aren't going beyond beauty and truth, just beyond demonstrable beauty and truth, flickering upwards into regions that we can't perfectly capture in deductive systems and rigorous maxims. Demonstrable beauty and truth is in our power, achievable by sheer skill. But we know that there is something beyond the limits of skill alone, something we can't reach in a systematic way, but sometimes do attain.

Thus we rise up from our uncultivated powers of mind, through The Common, The Beautiful, and The Graceful, to our highest excellence, The Sublime. From demonstrable beauty and truth up to sublimity we are in the region of genius and taste. Most great genius and fine taste reaches up into the realm of grace, but very few reach the heights of sublimity, which Reynolds calls the "ne plus ultra of human conception".

Well aware that people might think the diagram a bit fanciful, she takes the trouble to point out that it is just a graphical representation of a philosophical account that has close analogues in the works of John Locke and Sir Francis Bacon, although the account itself was developed independently of their works.
Posted by Brandon at 8:51 PM