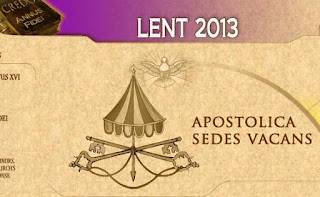 From the Vatican.va website. This is an image of the Umbraculum, which means exactly what you think it means; the Italian is Ombrellino. It is a standard papal symbol, representing the temporal powers of the Holy See -- governance of Vatican City, fiscal administration of the Patrimony, and the like. Despite being purely papal, it appears on the coat of arms of the Cardinal Camerlengo of the Holy Roman Church during a papal vacancy, because he wields the temporal powers of the papacy as steward and agent of the papal office. He only wields the temporal powers. Papal powers of routine and emergency ecclesiastical administration are administered by the College of Cardinals; and the entire episcopal college in communion with the Holy See retains, of course, its magisterial authority (to be in communion with a see, including the Holy See, does not require that the see be currently occupied by a bishop, because communion is, to put the matter somewhat simplistically, liturgical).

I once thought of writing a science fiction story called "Camerlengo," taking place in the far future, where, due to extraordinary and unexpected catastrophe and upheaval, the See was vacant and the College of Cardinals was literally unable to meet in proper Conclave for a very long period of time -- decades, perhaps. This would affect the Catholic Church in general much less than one might think, but obviously there would be problems to deal with. The story would have followed the Camerlengo in episodic fashion from the Incident (whatever it would be) through struggles to the final victory of forming the Conclave. In effect, it would be a story about a man dealing with the immense pressures and responsibilities that come with having to be a caretaker of another's estate for an indefinite period of time, along with the risks and temptations that could mean even for a very decent and intelligent man. It would be an interesting story to write, but to do it properly would take a fair amount of research and a properly thought-out Incident to set it all off, which is why this summary is about as far as the story ever got.
Posted by Brandon at 7:38 PM