The rocky shore of the Lake of Lucerne, opposite Schwyz. The lake here forms a bay, with a hut a little way from the shore. A fisher-boy is rowing his boat. Across the lake the green meadows, farms and villages of Schwyz can be seen, lying in bright sunshine. To the left of the spectator, the peaks of the Haken can be recognised, veiled in mist; to the right, in the far distance, icy mountains. The herdsman's melody and the musical chiming of cowbells are heard before the curtain rises, continuing for some time afterwards.

FISHER-BOY (singing in his boat. Melody of the ranz des vaches.)
See how the lake so invitingly gleams,
And there on the bank how the fisher-boy dreams;
A music he hears then,
A fluting so fair,
Like voices of angels
In heavenly choir.

Summary: Switzerland seems almost idyllic, but a storm is beginning to gather over the regions of Schwyz, Unterwalden, and Uri. The Swiss are in an unusual situation within the Empire, being a loose collection of cantons allowed to do their own thing under direct authority of the Emperor and his representatives. The current powers that be, however, are steadily encroaching on freedoms that the locals have had for centuries, and are finding that the Swiss take more than words to convince. In the middle of all this is simple, straightforward William Tell, practically a feature of the mountains himself, excellent hunter and boatsman, and, like many an outdoorsman, Tell just wants to avoid trouble and be left alone.

It is not to be. As the pressure of the government, and particularly the zealous governor, Gessler, grows, he finds it difficult to avoid involving himself on occasion. And by sheer happenstance, he becomes the center of a maelstrom when (in a scene that seems to have been made up by Schiller) he fails to show respect to the governor's hat, hanging on a pole in a field, put there as a test of loyalty. Out of this comes Tell's first amazing feat, when the governor cruelly demands that he shoot an apple off the head of his own son. Tell draws two arrows and achieves the feat with the first.

When Gessler asks why he drew the second arrow, Tell finally admits that the second arrow was for the governor if Tell's son had come to any harm. So Gessler arrests him anyway. The sets up for Tell's second amazing feat, as a storm comes up while they are taking a boat on the way back. Since he is the best boatman in the region, they remove his bonds, but he, seeing a desperate opportunity, makes a great leap from the boat to the shore. There is, incidentally, a little chapel on Lake Lucerne to commemorate the Tellensprung, as it is called. 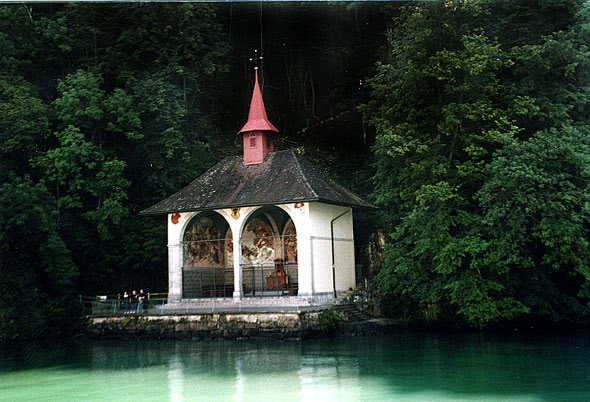 Tell becomes a symbol of revolt -- ironically, since the unbearable incident that drives the revolution is Tell's going above and beyond what anyone could reasonably expect by obeying a cruel and arbitrary order that put his own son at risk. It does so, of course, because in a very public and visible way it shows all the Swiss that Gessler and others like him are not just an inconvenience but a threat to their families. Tell does not, however, lead the revolt, this being a real revolt and not a Hollywood movie. William Tell's only significant contribution after his great leap -- although it is a very significant contribution -- is to speed his second arrow to its destiny in Gessler's heart.

The local citizens join together in a covenant to overthrow the governors. They do not attempt to break away from the Empire, a fact of considerable significance; they see themselves not as rebelling against the Empire but as upholding the Imperial charter that through the centuries has recognized their way of life. This is paralleled in Tell's meeting, at the end, with the Duke John the Parricide, who is on the run after having killed his uncle the Emperor. Tell is horrified at the man, who has killed his own blood over resentment about an inheritance, and, indeed, dared to kill no less than the Emperor. Tell had never originally had any ideas of assassinating a governor; he had just wanted to be left alone. The governor commanded him to endanger his son, and then arrested him even when he obeyed, leaving his wife and sons to fend for themselves; Tell acted on behalf of his family. It was the one oppression more than any man could bear, not a relatively trivial thing like shortchanging a patrimony, and Tell acted against an enemy of his family, not against a member of it.

I was pleasantly surprised by Francis Lamport's translation; verse drama is very difficult to interpret in a way that doesn't end up turgid or awkward, but he does quite well. If you are looking for a good translation, it works well.

Favorite Passage: Stauffacher, one of the leaders of the revolt, gives this passage as part of a long speech. It was a passage that was often censored when the play was performed in the early nineteenth century.

No, there are limits to the tyrants' power.
When a man finds that justice is denied him,
When he can bear no more, then he will look
To Heaven at the last with bold assurance
And claim from Heaven his eternal rights,
Which hang there like the very stars themselves,
Inalienable, indestructible. --
The ancient state of nature will return,
When man to man we stand in weal or woe --
And in the last resort, when nothing more
Remains to save us, we still have our swords.
What is most dear to us we may defend
Against oppression -- We stand for our country,
We stand here to defend our wives and children! (p. 53)

Recommendation: A light tale about deep politics, and especially about the overwhelming importance of the rights that protect one's home and family. Highly recommended.