It helps, when touring Florence, to be flexible. All the museums have different schedules and exhibits close for restoration; any number of things might happen.

Monday after the Palazzo Vecchio was a very good example of this. There was one and only one thing that I regarded as absolutely must-see for Florence, and that was the San Marco museum, which has the best collection in the world of the paintings of Blessed Giovanni da Fiesole, also known as Fra Angelico. So we headed there next, only to discover that we had read the schedule wrong -- while the Museum of San Marco is open on Mondays (unlike a number of other museums in Florence), it is only open every other Monday, and not that Monday. This was a serious disappointment, because we already had something set up for Tuesday that we couldn't back out of, and we were leaving Florence on Wednesday morning. So I did not get to see my one must-see for Florence.

So what to do then? The Ospedale degli Innocenti was nearby, so we headed there -- only to discover that the whole museum was closed for restorations. So we finally ended up next door in the Museo Archeologico Nazionale. As it turns out, it's a variable hours museum, so we could easily have missed out on it, too, but as it happens, third time was indeed a charm.

Apparently very few tourists go to this particular museum; the staff didn't speak English, or at least not well enough to be comfortable doing it. In Florence anywhere you find tourists the staff speaks English; English is the language of tourism, since not only is it spoken by Americans and members of the British Commonwealth -- who pack a lot of monetary punch -- but it is also the most common second language. East Asian tourists almost always speak English, and two people from different parts of Europe are more likely to know English than each other's language. There was one point in a restaurant, just before leaving Italy, in which I noticed that there were eight tables filled -- four with Italians, two with Americans, one with French-speakers, and one with Spanish-speakers; the waitstaff spoke Italian with the Italians and English with the Americans, French-speakers, and Spanish-speakers. So coming to a museum in which people didn't immediately start speaking English was unexpected. 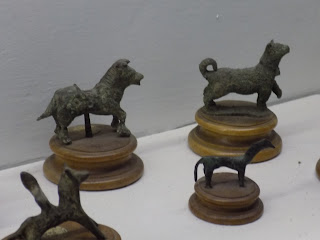 And an Egyptian hippopotamus: 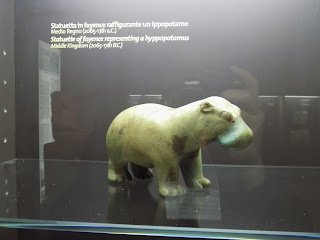 Their Egyptian exhibit, without being flashy, was quite good, in fact; they had several mummies, but I didn't get a photograph of them through the glass that I liked very well, so you'll just have to imagine them.

From there we went (after gelato) to visit the Capelle Medici -- but it's one of the museums that close early, and all the museums of Florence start turning people away about half an hour before closing time, and we were just over, so we couldn't see that, either. Since the Capelle is right by the Basilica di San Lorenzo, we did that instead. 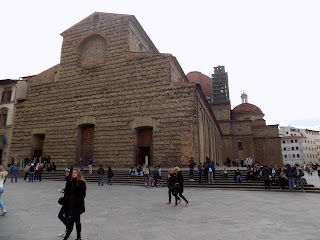 St. Lawrence was the first cathedral of Florence, before the seat of the bishop was moved to Saint Reparata, where the current Duomo is. The original church on the site went back at least to the fourth century and the current version of the church was designed by Brunelleschi. Funding became uneven, however, and the construction ended up taking longer than Brunelleschi intended; budget cuts forced him to modify his designs; and the church was still not finished when he died.

One of the curious features of the church is quite visible in the photograph above: it has no outer facade. Ordinarily the rough stone surface that you see would have had a marble facade hung on it, like all of the churches in Florence. For instance, here is Santa Maria Novella for comparison: 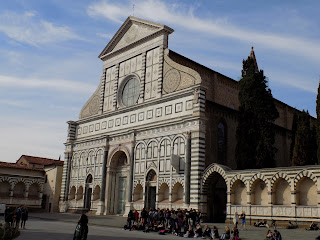 Michelangelo was picked to design the facade, and he did design one. However, he was pulled off the project to do other things, the originally intended funding was diverted to other projects, and the facade was never built. There is actually something of a debate in Florence today as to whether the church should be kept as-is or whether it should be completed according to Michelangelo's plan.

San Lorenzo is famous for having some of the last and greatest works of the Renaissance sculptor, Donato di Niccolò di Betto Bardi, best known by his nickname of Donatello. His works are found throughout Florence, but anyone interested in Florence has to see San Lorenzo. His work is a major part of the Sagrestia Vecchia that was completed in Brunelleschi's day, and it is the place he was buried: 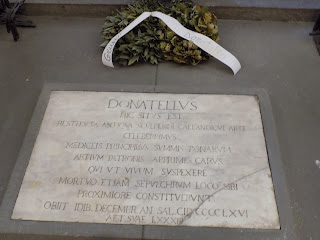 There is a great deal of beauty in San Lorenzo, but for me the greatest attraction was this: 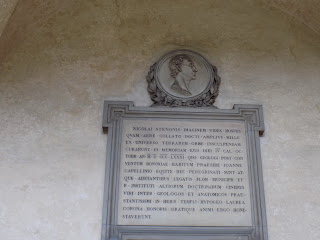 I had completely forgotten that Blessed Nicholas Steno had been buried in San Lorenzo; finding his funerary monument was a delightful moment. Steno was actually quite friendly with the Medicis. He became in-house physician to Ferdinando II, and the Grand Duke liked him so much that he was given an invitation to live in the Palazzo Vecchio, and all that was asked in exchange was that he start building up its natural history collections. He had already done his major work on glands and doing the groundwork to show that Descartes was wrong about the pituitary gland, but it was in Florence that Steno did his major work on muscles; it was in Florence that he began his work on stratigraphy and paleontology; and it was in Florence, watching the Corpus Christi procession, that he began to wonder if he, a Lutheran who had spent most of his adult life in freethinking circles, should become Catholic. He started reading the Church Fathers, and converted in 1667. It was in Florence that he was ordained a priest at the age of 37; he preached his first homily in the church of Santissima Annunziata. He went on mission to Lutheran regions of Europe for almost two decades, and then planned on returning to Florence. He died while still in Germany, but his body was shipped back at the request of Cosimo III, and they made sure that he was buried in San Lorenzo with all of the Medicis. Steno may have been born in Copenhagen, but he was truly a Florentine.

From San Lorenzo we went to the nearby Palazzo Medici Riccardi, about which I had known nothing at all beforehand. The palace was designed by Michelozzo di Bartolomeo for the Medici. It is (deliberately) unimposing from the outside; the Medicis had returned from exile and were trying to be less ostentatious about their power. Much later it was bought and expanded by the Riccardi family (hence the name), and now it is a functioning government building. Because it's in active use, the museum parts themselves only cover part of the palace, and it is quick stop. Here is a room: 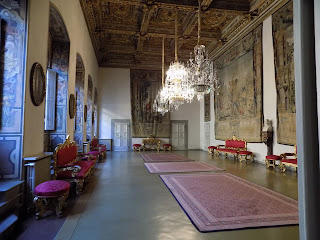 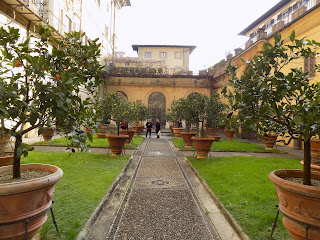 And the same garden from the other direction: 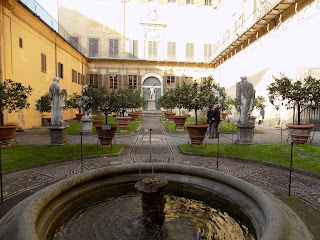 There was also a small robotics exhibition in the museum: 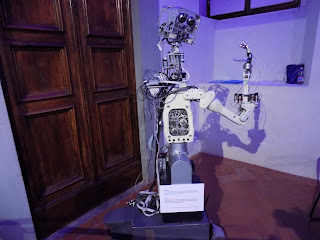 And that was Monday.

to be continued
Posted by Brandon at 5:01 PM