On Wednesday morning, we left for Rome.

Our hotel was in the Trevi district, so the first Roman sight we saw was the Fontana di Trevi: 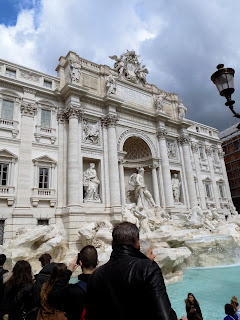 Nobody knows for sure what 'Trevi' means, but the most plausible and commonly accepted etymology is that it's just the short form of tre vie, because the fountain is found where three very old streets meet. According to legend, in the days of Augustus a bunch of thirsty Roman soldiers met a young virgin girl who led them to a spring about eight miles from Rome. According to some late sources, the virgin was called Trivia, and that is another possibility for the origin of 'Trevi'. Hearing about this, the legend goes, Augustus Caesar ordered the creation of an aqueduct from the spring to Rome to feed the Baths of Agrippa. You can see the story represented on the fountain (upper left-hand and right-hand sides).

A fountain was eventually put in place, but in 1629, Pope Urban VIII decided that there needed to be something a bit more impressive at that location. So he held a design contest, and the design was awarded to Nicola Salvi. The whole fountain took thirty years to build, and Salvi died in the meantime; it was finished by Giuseppe Pannini in 1762 when a sculpture of Oceanus by Pietro Bracci was put in the central position. It is now perhaps the most famous fountain in the world, and is certainly the largest Baroque-style fountain in the world. 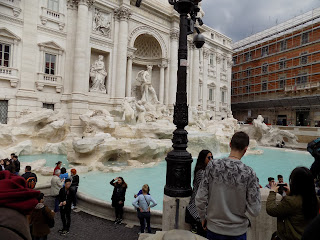 The church of Santi Vincenzo e Anastasio a Trevi is right there at the fountain: 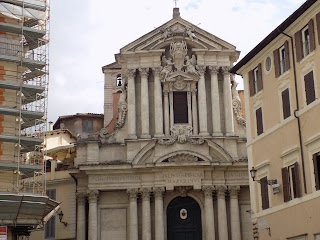 The current church was completed in 1650 by Cardinal Mazarin, and has a fairly distinctive facade because nobody imitated it -- the Romans made fun of it and called it The Canebrake. The church is most famous because it has all the hearts of the popes from Sixtus V to Leo XIII; which, you must admit, is a very unique kind of collection. The building to the left of the church is the Palazzo Castellani; if it weren't in the way, I could have given you a picture of the Quirinal Palace, for which it was once the parish church.

Rome is not as easy to navigate, nor as friendly to tourists, as Florence, so it helps to have a tour guide. (Tour guides have to be properly licensed, and apparently it is both difficult to pass the licensing test and the police rigorously enforce the license requirements.) Our tour guide was Ilaria Marsili, who was excellent. Tuesday afternoon we met up with her to explore ancient Rome, particularly around Palatine Hill.

We started near the Altare della Patria, which commemorates Vittorio Emanuele II and the Unification of Italy: 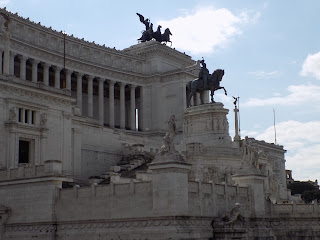 That's the Italian interpretation of 'gaudy monstrosity'. It is immense and pretentious, to the point that it is almost ridiculous, and its visibility is about the only aesthetic feature it has going for it. Apparently it was very controversial almost from the beginning because building it required destroying an entire neighborhood of Rome near the Capitoline Hill. It does have one redeeming feature, since when it inevitably gets destroyed at some point in the future, whether that's centuries away or millenia, it will leave lots of room for much better monuments.

Our real interest, however, was in the Forums. Here's a nice layout (from Wikimedia) of the Roman Forums, as they would originally have been:

One of the most famous monuments in the Forums is Trajan's Column: 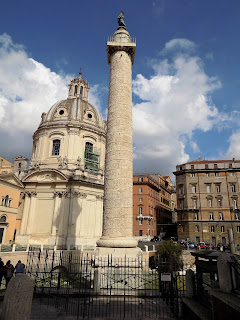 It was built to commemorate Trajan's victories in the Dacian Wars. Here you can see a bit of the detail of the relief: 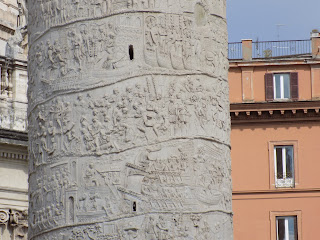 Because of its great height, building it was a significant engineering achievement in its day -- the Romans were good at lifting things with cranes, but the Column is too tall for Roman cranes, and they had probably primarily used a lifting tower with a lot of pulleys. It's actually hollow, with a spiral staircase instead which was designed to let people come out on the top deck and see the Forum from there. Originally there was a statue of Trajan at the top, but it vanished through the centuries. Pope Sixtus V had a bronze statue of St. Peter placed on top of it in 1587, which is still there today: 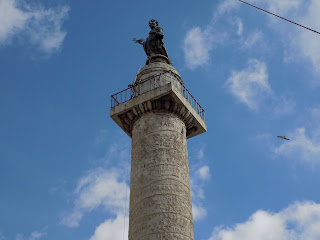 Trajan's Forum was the last of the Forums in the complex to be built; it was intended to stun and amaze. Originally 980 feet by 607 feet, only fragments remain, with some of the pillars re-erected to suggest the original to the imagination: 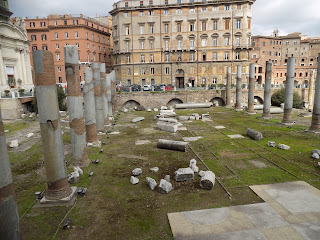 In Trajan's Forum is Trajan's Market, a very large complex of what would once have been shops and offices: 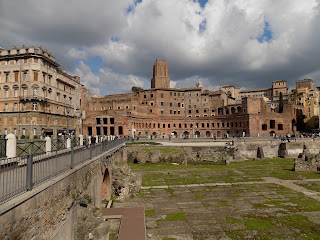 On Trajan's side of the street, the Romans have sensibly put up a statue of Trajan: 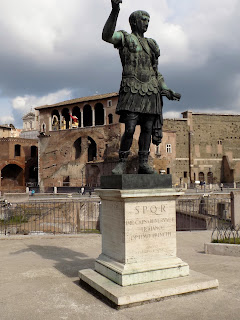 Across the street, in front of Caesar's Forum, there is the statue of Julius Caesar: 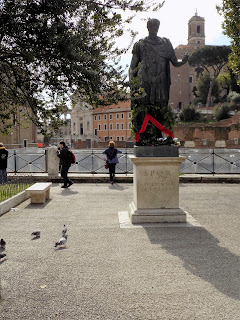 He's decorated because we were there the day after the Ides of March. 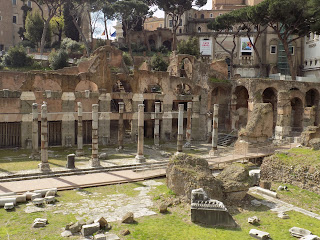 And where we will be heading next: 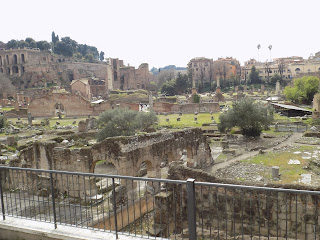 to be continued
Posted by Brandon at 7:50 PM