The last installment ended with looking out over the Forum Magnum, or Forum Romanum, after having seen the Forum of Trajan and the Forum of Caesar. In long ages ago, the Forum was an extremely marshy area among the hills, but the development of irrigation technologies made it possible to give the area a proper drainage and build. However, one of the consequences of this is that the area covers over more quickly than many other ruins do; erosion from the higher area around increases the height of the ground at a brisk pace -- at least, at a brisk pace for the slow creep of sedimentation. This means that the Forum through its centuries has picked up many layers, since as the ground rose, people just paved over what was there before. Here's an interesting map showing the Forum in two of the different stages -- red for the Republic and black for the Empire -- whose remnants we can still recognize:

Here is the Basilica Aemilia: 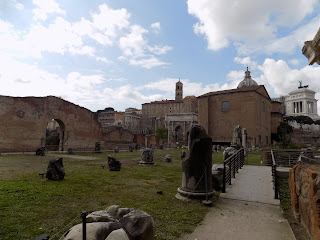 The Basilica Aemilia was begun by Marcus Fulvius Nobilior in about 179 BC on the site of what had originally been a butchers' market; it was originally called the Basilica Fulvia. It seems to have taken the name Basilica Aemilia because it was actually only completed by Marcus Aemilius Lepidus, Marcus Fulvius's successor and political enemy, if we assume that Lepidus's building was the same as Nobilior's rather than a neighboring one. The building underwent reconstructino in 55 BC by Lucius Aemilius Lepidus Paullus; Julius Caesar had bribed Paullus for support, and Paullus funded the reconstruction with the bribe money. Various events required various restorations in the centuries, but at some point, people just stopped maintaining it, and it fell to ruin. And so with the whole area. 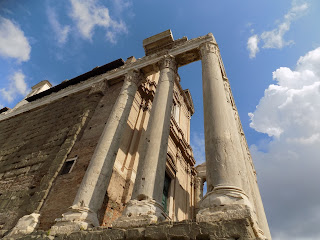 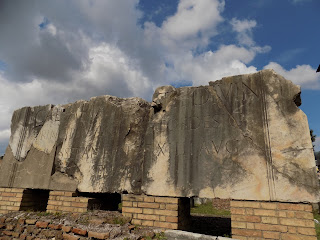 As I mentioned before, we were visiting the day after the Ides of March, so the Ara di Cesare was especially notable decorated with the remnants of the previous day's festivities. A plaque with a quotation from Appian's Civil Wars 2.148: 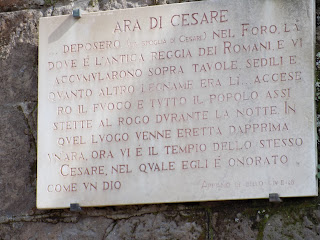 The full passage from which this little excerpt is taken:

The people returned to Caesar's bier and bore it as a consecrated thing to the Capitol in order to bury it in the temple and place it among the gods. Being prevented from doing so by the priests, they placed it again in the forum where stands the ancient palace of the kings of Rome. There they collected together pieces of wood and benches, of which there were many in the forum, and anything else they could find of that sort, for a funeral pile, throwing on it the adornments of the procession, some of which were very costly. Some of them cast their own crowns upon it and many military gifts. Then they set fire to it, and the entire people remained by the funeral pile throughout the night. There an altar was first erected, but now there stands the temple of Caesar himself, as he was deemed worthy of divine honours; for Octavian, his son by adoption, who took the name of Caesar, and, following in his footsteps in political matters, greatly strengthened the government which was founded by Caesar, and remains to this day, decreed divine honours to his father. From this example the Romans now pay like honours to each emperor at his death if he has not reigned in a tyrannical manner or made himself odious, although at first they could not bear to call them kings even while alive.

That's actually quite ominous, if you know your Roman history. But it was also a long time ago, and the remains of the previous day's festivities were still to be seen. Flowers on the altar: 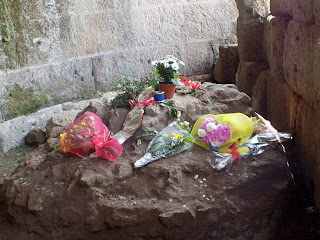 The remains of laurel crowns: 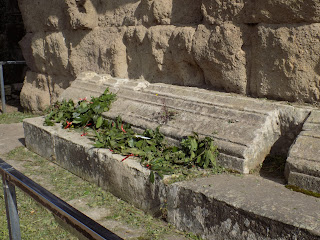 I didn't get a good look, snapping the picture hastily in passing, but I believe that this is the Arch of Septimius Severus, to commemorate his Parthian victories and those of his sons: 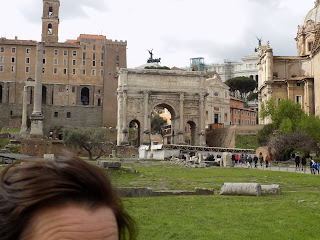 The ruins of the Temple of Vesta: 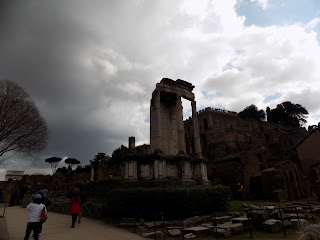 The Temple of Vesta was one of the most important buildings in Ancient Rome. It was said to have been built by the heroic-age king Numa Pompilius, although the remains we have are clearly from some later reconstruction or expansion. It housed the hearthfire of Rome itself (the remains above, in fact, are the last bit of the hearth); the most important legal documents and sacred artifacts of the City were stored there. If the flame went out, the Romans took it as a sign that disaster was about to strike, and it was assiduously maintained until Emperor Theodosius extinguished the flame in 394 after the Battle of Frigidus. Most of the destruction of the Temple only occurred in the sixteenth century; what we see of it now was reconstructed in the twentieth.

I foolishly thought for ages that there were statues
Of Vesta, later I learnt there were none beneath her dome:
An undying fire is concealed with the shrine,
But there’s no image of Vesta or of fire. 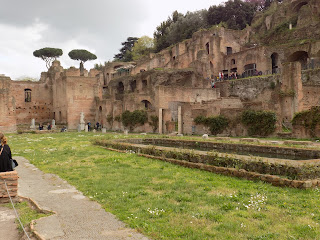 And a room off to the side: 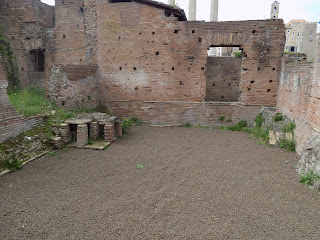 And more of it rising on Palatine Hill above the courtyard: 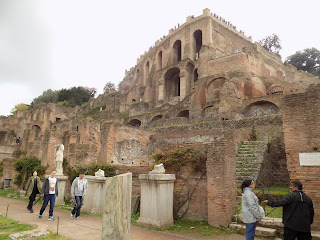 And here we are looking down into the Atrium: 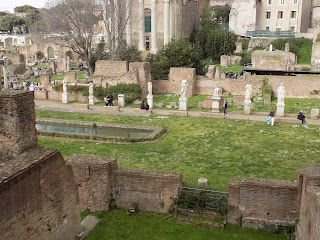 And, finally, looking back across what we had just toured: 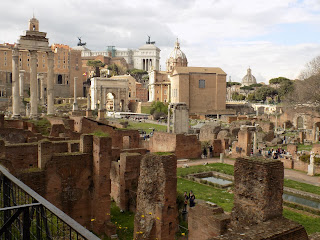 to be continued
Posted by Brandon at 10:40 AM