Heading back from St. Peter's Square we passed, of course, Castel Sant'Angelo: 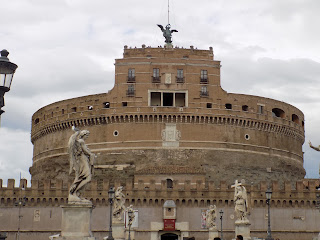 Castel Sant'Angelo is the Mausoleum of the Emperor Hadrian, built in the second century; it was used to store the ashes of the Roman emperors for the next several decades. The ashes seem to have been scattered in one of the sacks of Rome, and most of the original decorations of the building have been lost. According to a legend, the Archangel Michael appeared at the top of the building to signal the end of a plague in the sixth century, which is the reason for the current name. In the late Middle Ages, the building became a fortified castle for the popes; it later became a prison and, beginning in 1901, a museum. A statue of an angel was first put on top of the building in the sixteenth century; that original marble statue was replaced by a bronze statue made by Peter Anton von Verschaffelt in 1753, which is still there.

Hadrian also built the Pons Aelius across the River Tiber, part of which makes up the current Ponte Sant'Angelo: 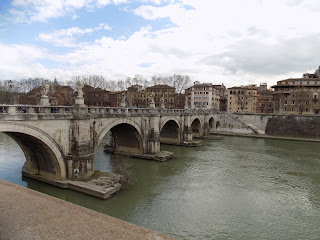 In the sixteenth century Raffaello da Montelupo, who had sculpted the original stone angel for the top of Castel Sant'Angelo was commissioned to decorate the bridge with fourteen statues of angels. By the late seventeenth century they weren't aging well, so Clement IX commissioned Bernini, near the end of his life, to design replacements. Bernini had the idea of ten angels holding the Instruments of the Passion of Christ. He managed to do two of them with his son Paolo, the Angel of the Crown of Thorns and the Angel of the Superscription. Neither, however, is on the bridge: the pope liked them so much that he kept them, so the current versions of those angels are copies of Bernini's statues by other artists. The Angels are:

We lunched in the Piazza Navona, which is built on the site of the ancient Stadium of Domitian: 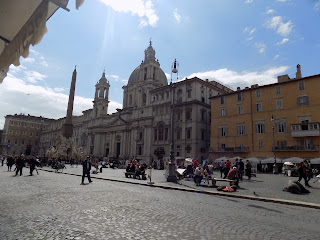 The church is Sant'Agnese in Agone. The 'in Agone' is actually just the earlier name of the plaza, which was corrupted over time to 'navona'. The church marks the spot where St. Agnes of Rome was supposed to have died in the early fourth century (the other major church devoted to her, St. Agnes Outside the Walls, marks her burial spot). The current church was built in the seventeenth century; Pope Innocent X had his family residence in the recently built Palazzo Pamphili immediately to the left of the current church, and he wanted to make the church that was previously there a chapel appropriate to his new family home. He commissioned Girolamo and Carlo Rainaldi to design it. The Rainaldi plan was extremely controversial, though, and they were replaced by Francesco Borromini, who had to use the Rainaldi floor plan but made liberal changes in other respects. Borromini became frustrated with his employers and resigned the commission; Carlo Rainaldi took over again. Carlo was replaced by Gian Lorenzo Bernini. And shortly afterward, Bernini was replaced by Carlo again. (Different members of the Pamphili family seem to have had different tastes in architects.)

In front of the church is one of the most famous fountains of Rome, Bernini's Fontana dei Quattro Fiumi: 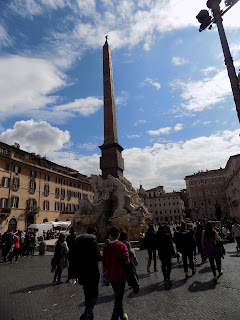 Each of the Four Rivers is from a different continent, symbolizing the spread of papal authority: the Danube, the Nile, the Ganges, and the Rio de Plata.

After lunch, we headed to our next destination: the church of Saint Mary and the Martyrs, or, as it is better known, the Pantheon: 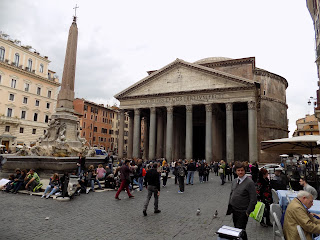 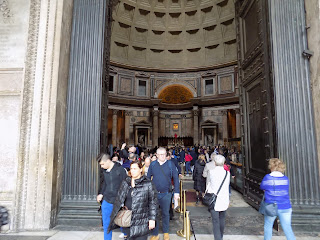 While the Pantheon was (as the inscription suggests) commissioned by Marcus Agrippa in the reign of Augustus, that version seems to have been destroyed, and the one that currently exists appears to be a restoration that wasn't actually completed until the second century in the reign of Hadrian. Its dome is, after two thousand years, still the world's largest unreinforced concrete dome, and it is one of the best preserved of all ancient Roman buildings. In the seventh century, the Emperor Phocas gave it as a gift to Pope Boniface IV and it became a Christian church. A number of notable people are buried there, including King Vittorio Emanuele II, but the most notable is the the artist Raphael Sanzio. Alas, I did not get a good photograph of his tomb; here is one from Wikimedia:

And that was Thursday, and the end of Rome. One of the things that is very clear is how little we actually saw: even for places we visited, like the Forum or St. Peter's, we only saw small slices. Everywhere there were too many things to see, not enough time, and too many things to work around to see what we could. It would have been nice to see some other things -- St. Mary Major, for instance -- but it was not to be. The Raphael Rooms in the Vatican Museums were what I most wanted to see -- but they were undergoing restoration, so, just like Florence, I didn't have any opportunity to see my only must-see thing. But it is better that the Raphael Rooms be preserved than that I should see them, and with such an abundance of things to see it would be foolish to complain.

We then returned to the original city into which we had flown, Milan.