On Friday we went to Milan, about a three hour ride by high-speed rail.

Mediolanum is an old city, with a very long history. It was settled by Celts in the fifth century BC and conquered by Romans in the third century BC. For a period of time under Domitian it was the capital of the Western Roman Empire. It was a major site of conflict between the Guelphs and Ghibellines. It was one of the major cities of the Italian Renaissance. After Napoleon invaded Italy, it was the capital of the Cisalpine Republic, and later of his Kingdom of Italy. In the eighteenth and nineteenth centuries, its opera houses and theaters were among the greatest in the world. Mozart and Verdi debuted works here. Milan has almost always been a thriving trade center and today is one of the economic powerhouses of Europe.

Very little of this is obvious, though. Rome always feels very big and overcrowded; Milan, the second most populous city of Italy, rarely feels so, with plenty of walkable areas and gardens all over the place. You can hardly move around in Rome's historic center without stumbling on something ancient; Milan's ancient Roman history only very rarely comes out. And in World War II, as the economic center of Italy, Milan was very heavily bombed throughout the war. Almost a third of its buildings were destroyed; very few of its great medieval and Baroque buildings and monuments escaped being at least damaged, and some vanished entirely. Milan, almost everywhere, seems very modern, because Milan, almost everywhere, is indeed very modern.

But despite the pulverization of so much of its history, Milan still has treasures. The most obvious is the Cathedral of Santa Maria Nascente -- most often known as the Duomo di Milano: 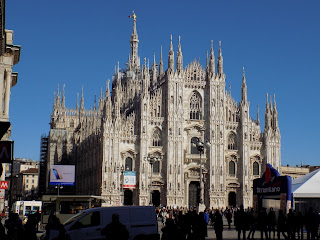 A photograph does not in any way do it justice. The Duomo, the heart of the Ambrosian Rite of the Latin Church, is the largest church in Italy. (St. Peter's is larger, but, of course, it is not technically in Italy.) It is usually said to be the fifth largest church in the world. It is over 10,000 square meters in area, over 440,000 cubic meters in volume, and it took nearly six centuries to build. The fortunes of the cathedral are closely connected with the history of Milan.

In 1385, Gian Galeazzo Visconti of Pavia seized Milan by overthrowing his uncle Bernabo by breaking a few promises. Bernabo was, however, very unpopular with the Milanese because of his very oppressive taxes. Using his new position as Signore of both Pavia and Milan, he went on to take Verona, Vicenza, and Padua (although he would later lose the last of these). One of the things he did as his fortunes were quickly rising was promise to the Milanese a grand new cathedral. The Milanese, happy to be out from the heel of the taxing taskmaster, were enthusiastic about the project -- so Gian Galeazzo, very cleverly, began to take donations for it, and the first stone was laid in 1386. Construction proceeded quite swiftly, and soon half the brick structure was built. But Gian Galeazzo died of fever in 1402, and very little was done afterward, although bits and pieces would be done here and there. The very Gothic cathedral got a few High Renaissance touches here and there.

In 1564, St. Carlo Borromeo became Archbishop of Milan, and one of his insights was to recognize that the guild controlling the construction of the cathedral was part of the problem; he used his influence to change the statutes and appoint Pellegrino di Tibaldo de Pellegrini as chief engineer. They planned on toning down the Gothic character of the cathedral (Gothic was increasingly seen as a Franco-German style) and giving it a more Italian Renaissance flair. But there was an immense of cathedral there, and an immense amount of cathedral yet to be done. Construction continued through the sixteenth century into the seventeenth, when the facade finally began to be developed. Construction continued through the seventeenth century into the eighteenth century, and in 1762, the Madonna's Spire was erected by Carlo Pellicani, with a gold-plated bronze statue of Mary placed on top of it, the Madonnina: 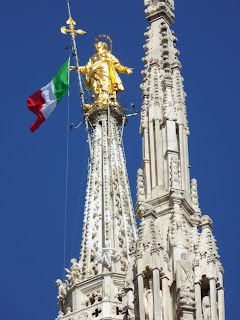 We were in Milan the day after Italian Unification Day, so that's why the Virgin Mary is waving the Italian flag. The Madonnina is one of the key touches of Milan. By tradition, no building in Milan is allowed to be higher than the Madonnina. But, tall as the Madonna's Spire is, Milan is a city of skyscrapers, and has been for decades! How can this be? When the Pirelli Tower was built in the 1950s in Milan, it was the tallest building in Italy. So they made a small replica of the Madonnina and put it at the top of the building. Skyscraper or now, it is still not higher than the Madonnina! When the Palazzo Lombardia rose even higher, they did the same. They did the same with the Allianz Tower of CityLife. One of the most famous folk songs in Milan, often regarded as the anthem of the city, refers to the Madonnina in its chorus:

It was written by Giovanni D'Anzi in the 1930s, and this bit means something like, "O my beautiful Madonnina, you shine brightly from afar; wholly golden and tiny, you rule over Milan. Life is lived beneath your feet without twiddling one's thumbs."

Life went on, and then came Napoleon. He wanted to be crowned King of Italy in the Duomo, so he promised the archbishop that if they finished the facade, he would reimburse the entire expense. That finally got things in full gear; the facade was finished and Napoleon was crowned King there in 1805. He then went off to fight in Russia and never got around to reimbursing anyone. 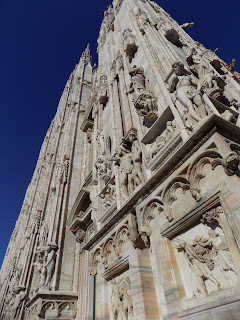 Arches and spires continued to be built through the nineteenth century. The last gate was put in on January 6, 1965, and this is usually the date given for the end of construction -- although there are still parts of the cathedral where you find blocks of stone that are supposed to be carved into statues at some point. There's so much going on with the cathedral, however, that you wouldn't notice it unless you were looking for it. It makes for an impressive whole. 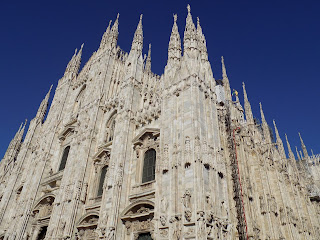 Here is one of the doors, not the largest: 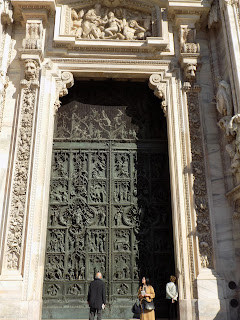 Inside, it is like a forest of columns. We were only allowed on the right-hand side (and thus actually missed a number of the most famous features of the cathedral). 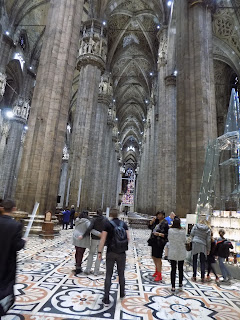 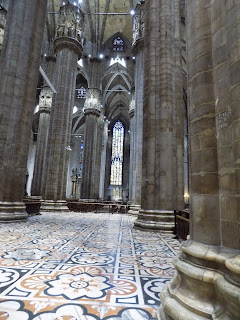 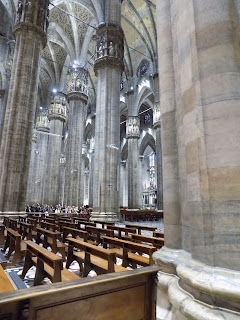 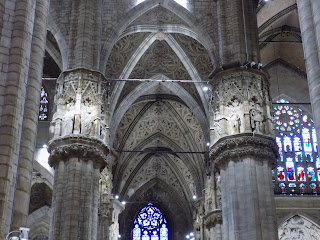 St. Charles Borromeo, of course, is quite prominent here: 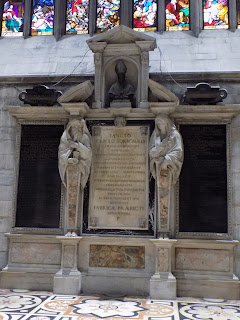 Now we will descend into the crypt, under the grand altar of Milan Cathedral, and receive an impressive sermon from lips that have been silent and hands that have been gestureless for three hundred years.

The priest stopped in a small dungeon and held up his candle. This was the last resting-place of a good man, a warm-hearted, unselfish man; a man whose whole life was given to succoring the poor, encouraging the faint-hearted, visiting the sick; in relieving distress, whenever and wherever he found it. His heart, his hand, and his purse were always open. With his story in one's mind he can almost see his benignant countenance moving calmly among the haggard faces of Milan in the days when the plague swept the city, brave where all others were cowards, full of compassion where pity had been crushed out of all other breasts by the instinct of self-preservation gone mad with terror, cheering all, praying with all, helping all, with hand and brain and purse, at a time when parents forsook their children, the friend deserted the friend, and the brother turned away from the sister while her pleadings were still wailing in his ears. 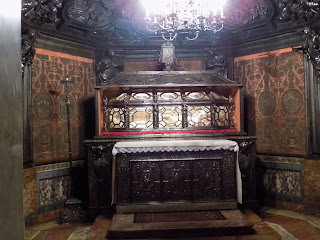 Even just seeing the right side of the church, there was a lot of it. And we came out again; a truism, perhaps, but perhaps also a bit less of one than it would be with another building. People sometimes get lost in forests.

What a wonder it is! So grand, so solemn, so vast! And yet so delicate, so airy, so graceful! A very world of solid weight, and yet it seems in the soft moonlight only a fairy delusion of frost-work that might vanish with a breath! How sharply its pinnacled angles and its wilderness of spires were cut against the sky, and how richly their shadows fell upon its snowy roof! It was a vision!—a miracle!—an anthem sung in stone, a poem wrought in marble! 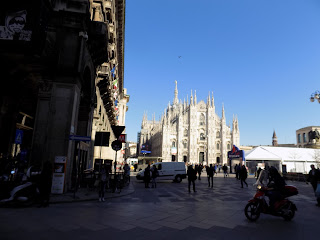