The most famous sightseeing spot in Milan, of course, is at the church of Santa Maria delle Grazie, which we see here from inside its courtyard: 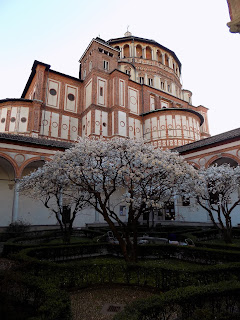 Santa Maria delle Grazie was built under the Sforza family. The Dominican convent to which it was attached was designed by the great Milanese architect Guiniforte Solari. It's not known for sure who designed the church itself. The traditional attribution is to Donato Bramante, but it could also be designed by Giovanni Antonio Amadeo; both architects were active in the Duchy of Milan during the right time period -- indeed, they sometimes collaborated. I didn't get any pictures of the inside of the church, but you can take a virtual tour online, with Italian commentary if you'd like it (click the fourth icon for the view of the inside of the church). It actually looks better online; it was quite dim and unlit when we were there. The church was hit by Allied bombardment in 1943, and was severely damaged. The refectory was almost destroyed, too, with one wall alone surviving, which had to be held up by sandbags. On that wall is the reason why Santa Maria delle Grazie is one of the most famous sightseeing attractions in the world: in the late fifteenth century Leonardo da Vinci painted a mural for the monks to look at while eating, The Last Supper. Unfortunately, you need reservations well in advance to get in to see it, and we were not able to get reservations for the time we were in Milan.

We were running out of time, so we headed back to the hotel. We stopped briefly, however, at another Milanese attraction, the Castello Sforzesco. Here is one of its towers (the Torrione di Santo Spirito, I believe): 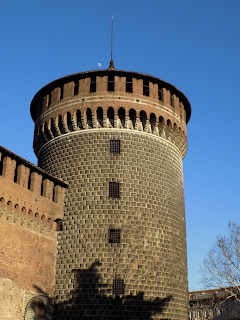 The most famous architectural element of the Sforza Castle is the Torre del Filarete, seen here from inside the Cortile delle Armi: 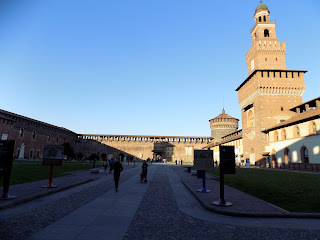 It gets its name from its architect, Antonio di Pietro Averlino, more commonly known as Filarete. He was a Florentine who spent most of his career in Rome, but had to flee the city at some point when he was accused of trying to steal the head of John the Baptist (i.e., the relic that the Romans had traditionally claimed was the head of the Baptizer) from the church of San Silvestro in Capite. He eventually came to Milan to work on the Duomo and was hired to help restore the glory of Sforza Castle, which had seen better days by that point. (It was nearly destroyed by the republicans of the Golden Ambrosian Republic, and so Francesco's Sforza's restoration was a deliberate statement of warning to, and superiority over, any republican sympathizers.) The current Filarete Tower was restored in the early twentieth century on the basis of old drawings.

Here we look opposite of the Torre del Filarete to the Porta Giovia and Torre di Bona: 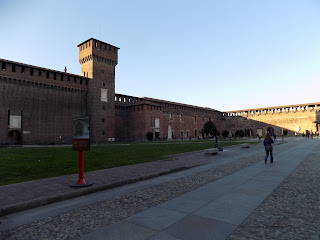 A large number of museums can be found throughout the castle. Like much of the Milan, the castle was heavily damaged in World War II; the museums help make restoration and preservation viable. We were, however, running out of time, so we headed out.... 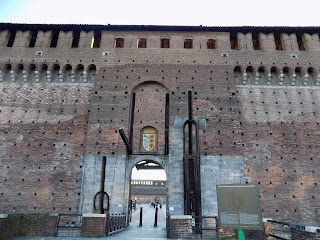 One of the more striking buildings in Milan is the Milano Centrale railway station, which is a mix of Art Nouveau and Art Deco. It was opened in the 1930s. It was designed by architect Ulisse Stachini and deliberately modeled on Union Station in Washington, DC, although a number of changes were introduced into the original design, particularly under Mussolini. Here we catch a brief glimpse of one wing of it at night, looking across the Piazza Duca d'Aosta: 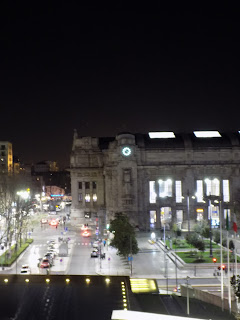 And the next day we flew away. Here are the Alps from Malpensa Airport; somewhere out there, out of sight, is Switzerland: 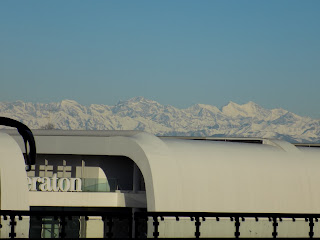 I'll follow at some point with some miscellaneous pictures.
Posted by Brandon at 3:17 PM