MrsD a while back mentioned Nathaniel Hawthorne's The Marble Faun, and that's the next fortnightly book. In high school I loved Nathaniel Hawthorne, and read almost everything I could get my hands on (I particularly liked The House of the Seven Gables and "The Celestial Railroad"). But I don't think I ever got round to reading this one, or, if I did, I don't recall anything about it.

1852 was an election year, and Hawthorne was friends with Franklin Pierce. Pierce was a dark horse candidate, having squeaked by in the nominations due to a tactical mistake by the supporters of Buchanan. Hawthorne contributed to his campaign by writing a political biography of his rather unexciting career that made the case that this was actually an advantage. When Pierce won the election, he named Hawthorne consul to Liverpool, England. That's a sign of how appreciative Pierce was, because it was not just a plum position, but one of the very most important foreign service positions, very well paid and very prestigious. As the Pierce administration drew to a close and Hawthorne resigned from his position, he and his family went on an extended holiday to Italy for over a year and a half. While there, Hawthorne kept detailed notes, and they became the basis for The Marble Faun: or The Romance of Monte Beni, which was published in 1860. (The British edition was published with the title, Transformation, against Hawthorne's wishes.) It had a very curious reception -- critics were ambivalent about it, since it was a mixture of genres that were usually kept distinct, and a lot of people seem not to have liked the ending. However, as it happened it came out at the right time -- Americans were increasingly going to Italy, and they started using Hawthorne's tale as a sort of guidebook. The places Hawthorne talked about in The Marble Faun became the must-see sites in Rome. There was even an edition made at one point with blank pages where tourists could paste their own photographs as illustrations in the book. In the book, Italy is a kind of fantasy locale, built not just out of monuments and natural scenes but out of layers of history and legend and myth; The Marble Faun gave Americans an atmosphere for their tours.

And to get us started, here is the statue that inspired the name and story of the book, known variously as the Capitoline Faun, the Faun of Praxiteles, and the Resting Satyr, which is a Roman copy of a Greek statue supposedly by the great Greek sculptor Praxiteles: 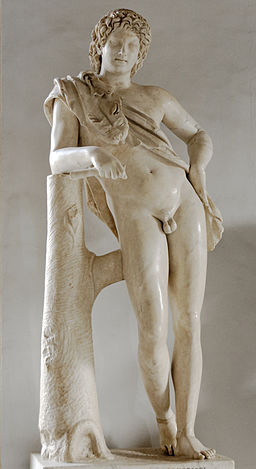