We are currently on page 13.

Stendhal reflects that the art of Italy, like that of much of Europe, is in shambles: music is «le seul art qui vive encore en Italie». The claim that there are two routes to pleasure in music, «la sublime harmonie» and «la mélodie délicieuse» is an interesting one, although I can't speak to the quality of Stendhal's music history in his discussion of it.

Most of the rest of the day's entry is the Story of Gina, which seems a fairly commonplace story of lovers. I suppose it connects to Stendhal's prior comment connecting the living music of Italy with love. It's possibly notable that Stendhal's Charterhouse of Parma has a character named Gina, although, since I have never read it, I also cannot speak to whether there is any influence on the book to be found here.

I confess it took me more than a bit to figure out what chétive was supposed to tell us. So we now learn that Soliva is puny like a man of genius, which is a description I intend to use of someone at some point in the future. And we get more description of the opera, Testa di bronzo, this time focusing on the cast.

The orchestra of Milan lacks brio; it is good for sweetness rather than forcefulness, in contrast to the Parisian orchestra of Favart. Thus Stendhal's recipe for a perfect orchestra:

Alessandro Rolla was a musical innovator and the music teacher of Paganini, and was the orchestra director at La Scala from 1802 to 1833. His music was often quite intense -- hence the gossip, which Stendhal also gives, that his music gave women "attacks of nerves".

Alas, I have no idea what Stendhal is trying to convey by his final analogy between French authors and Italian composers.

Finally something other than music! Bernardino Luini was a sixteenth century painter whose works are found throughout Northern Italy. Here is Luini's Adoration of the Magi, which I believe was once at Soronno, but now is at the Louvre: 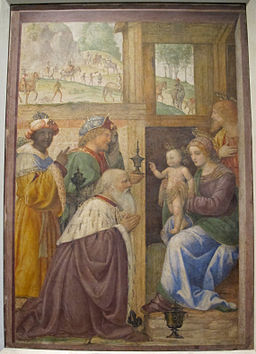 Daniele Crespi is seventeenth century; since Correggio is Stendhal's favorite painter, his saying that he has the sense of Correggio is a high compliment.

According to Daniel Muller's notes, Antonio Litta (1745-1820) was made duke by Napoleon, and was a particularly high muck-a-muck of Napoleonic Italy. Antonio Canova was the greatest sculptor of the day; it was on his advice that the British Museum bought the Elgin marbles. I don't know what statues by Canova Stendhal would have seen, but Canova's most famous work is Psyche Revived by Cupid's Kiss, which gives a sense of his neoclassical style: 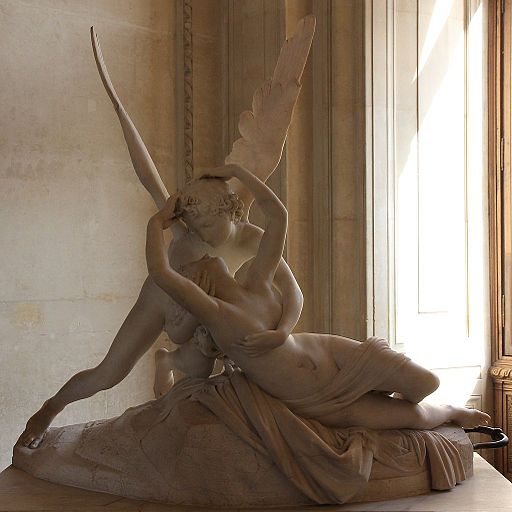 The Edinburgh Review gets rather biting with Stendhal's comments on Milan, for perhaps not entirely objective reasons:

About this period of his progress, breaks out that hatred of the English which never quite quits him during his whole journey. In the only remark upon Milan not connected with the theatre, he says the Milanese is remarkable for two things, 'la sagacité et la bonté;' and he adds, 'quand il discute, ile est contraire des Anglais, il est serré comme Tacite.' It is some comfort, however, to find that we are blamed in good company; for it seems, 'dés qu'il ecrit, il veut faire des belles phrase toscanes; et il plus bavard que Ciceron.'

David Muller describes this as «un ton un peu pincé». One can hardly blame the reviewer, though. That aside, it's another example of Stendhal's somewhat odd choices in comparisons. And, in any case, you can add 'more chatty than Cicero' to your list of ready insults.

We get a mention of Italian ice cream, and Stendhal is indeed right that it is divine.

More of the singing of Angelica Catalani.

If I understand the publication timeline correctly, the Milan entries ended here in the original 1817 edition, and then the work went briefly through Parma and Bologna to get to Florence. In later editions we get a good deal more of Milan.

So beautiful that we're going to talk about it some more.

In seriousness, though, it's interesting that everything we get about Lady Fanny Harley's face is stated entirely in terms of how it reminds Stendhal of paintings. It reminds me of Eco's monks, who always describe things through books.


And there's a break of nearly two weeks in the entries, so we'll pick up again in two weeks on page 34 with bonhomie italienne.
Posted by Brandon at 10:17 AM