Today is the feast of Caterina di Giacomo di Benincasa, better known as St. Catherine of Siena (1347-1380), Virgin and Doctor of the Church. She entered the Third Order of the Dominicans, and attempted to live a secluded life, but later had a vision in which she was told that she must be more involved in the world. As a Dominican tertiary, she is currently the only female Doctor of the Church who was not a nun (indeed, unless I am mistaken, the only nonconsecrated layperson in the whole group). She was actively involved in ecclesiastical politics, both in person and by correspondence. She has always been a very popular saint. In 1866 she was declared one of the patron saints of Rome; in 1939 she was designated, with Francis of Assisi, patron saint of Italy; and in 1999 she was designated one of the six patron saints of Europe. From one of her letters, to Ristoro Canigiani, one of the people for whom she became spiritual director:

It seems to me that the Sweet Primal Truth teaches us what we ought to seek when in the holy Gospel, reproving man for the intemperate zeal which he bestows on gaining and holding the honours and riches of the world, He said: "Take no thought for the morrow. Its own care suffices for the day." Here He shows us that we should consider prudently the shortness of time. Then He adds: "Seek first the Kingdom of Heaven; for your heavenly Father knows well that you have need of these lesser things." What is this kingdom, and how is it sought? It is the kingdom of eternal life, and the kingdom of our own soul, for this kingdom of the soul, unless it is possessed through reason, never becomes part of the kingdom of God. With what is it sought? Not only with words—we have already said that such as these are not recognized by God—but with the yearning of true and real virtues. Virtue is what seeks and possesses this kingdom of heaven; virtue, which makes a man prudent, so that he works for the honour of God and the salvation of himself and his neighbour, with prudence and maturity. Prudently he endures his neighbour's faults; prudently he rules the impulse of charity, loving God above everything, and his neighbour as himself. This is the rule: that he hold him ready to give bodily life for the salvation of souls, and temporal goods to help the body of his neighbour. Such a rule is set by prudent charity. Were he imprudent, it would be just the opposite as with many who use a foolish and crazy sort of charity, who many a time, to help their neighbour—I speak not of his soul, but of his body—are ready to betray their own souls, by publishing abroad lies, giving false witness. Such men as these lose charity, because it is not built upon prudence. 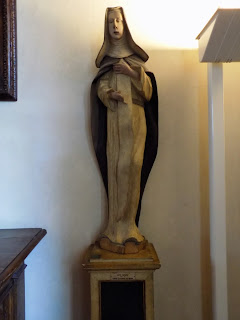 (Statue of St. Catherine of Siena in the Palazzio Vecchio in Florence)
Posted by Brandon at 6:04 AM