It's common for us to work with more modality than one; we need to see how multimodal reasoning can work. This can get very difficult and complicated. The simplest and easiest form of multimodal reasoning is when we have two modalities, one of which includes the other. For instance, suppose you want two Boxes, □1 and □2, and one of the modalities includes the other. So, for instance, let's take □1 to tell us that something is known by us and □2 to indicate that we accept it as certain. These are the not the same -- we can have certainty about things that we don't know, for instance. But there is a relation between the two -- we often think that if you know something, you have certainty about it. Then □1 includes □2, and we have two different Boxes related to each other. Let's also assume that both modalities, as we are using them, are 1234D modalities.

To make this easier to see, instead of □1, we'll say K, and instead of □2, we'll say C, so we don't confuse ourselves with lots of □'s. Our square of opposition with Rule (D) is: 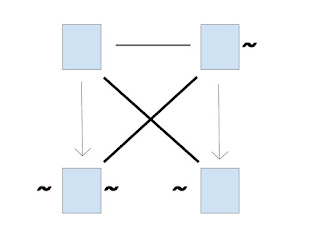 So both K and C will have a square of opposition that looks like this. So we just substitute K for □ to get our square for K: 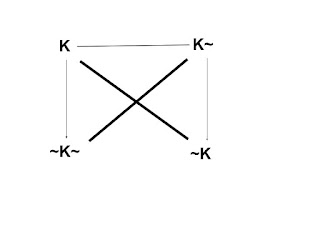 And we can substitute C for □ to get our square for C: 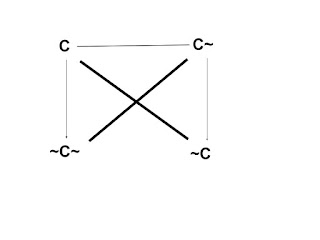 Now we just have to put them together. This requires some hard thinking about how 'X is something known by us' and 'X is something we accept as certain' relate to each other. Here is one possibility:

In real life, there are many cases in which (ii) might be controversial; this is where interesting philosophical questions begin to enter into our discussion (can you know something even if you are not certain of it?), but we're not interested in looking at these things right now, so we'll just assume that (ii) is true and see what the logic of that would be.

(1) All the relations in the K-square and the C-square stay the same.

(4) We have an arrow from K to C, but ~C is contradictory to C. What this means is that K and ~C are contraries. The same reasoning applies to K~ and ~C~. Remember, two things are contrary when you can't have both, but it's OK if you have neither. They are contradictory when you can't have both and you can't have neither. We can check that the contrariety bar really does go here: If we know something, (i) tells us that it has to be accepted as certain; thus there is no situation in which we can know something and not be certain of it. But (i) also tells us that we could be in a situation in which we don't know something but are certain of it. So K and ~C are contraries.

(5) We have an arrow from C to ~C~, but ~C~ and K~ are contraries. So this means you can't have both C and K~ (that is, we can't accept something as certain and know that it's not so); C and K~ are therefore contraries. The same reasoning applies to K and C~.

There are enough corners and lines that we could picture this combination of squares of opposition in more than one way, but here's an attempt to do it in a way that keeps most of the oppositions easy to see. The thick black lines are contradiction, the thin lines are contrariety, and the arrows are subalternation. 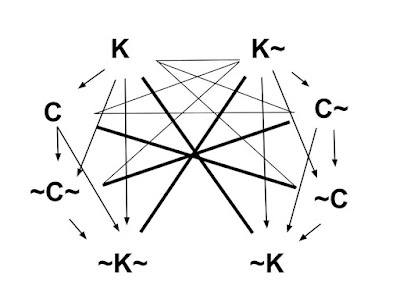 So with just two Box modalities, and thus two squares of opposition, related in a fairly simple way, we get lots of different oppositions! But it's not as complicated as it might look at first. Notice that left and right are symmetrical, for instance -- the one mirrors the other. You can have relations between modal operators that are not symmetrical like this, but the symmetry is very common, and makes it easier to use.

Multimodal reasoning can be a lot of work! But the above example is simpler than most; it did not use anything more complicated than a 1234D Box.