For our next day, we crossed the Firth of Forth to the Kingdom of Fife to see Falkland Palace. Falkland Palace came about by James IV and James V reworking an older castle in grand Renaissance style. It is known for having the oldest extant Real Tennis (also known as Court Tennis) court, created in 1539. A fire partly destroyed the Palace after Cromwell's troops occupied it, and it sat there in ruins for a very long time. In 1887, the fantastically wealthy 3rd Marquess of Bute, John Patrick Crichton-Stuart, father of the Marquess of Bute who bought The Georgian House, purchased the building and began extensive renovations. He made a genuine effort to maintain historical integrity of the castle, with the result that bits and pieces of the Palace are quite old. The Marquess of Bute still owns it, but in 1952 the actual operations were turned over to the National Trust for Scotland. Since, as I mentioned before, I'm a member of National Trust for Scotland USA, I got in free.

Falkland Palace, of course, is in the little village of Falkland, which is also famous for its square, with the Bruce Fountain, dating from 1856: 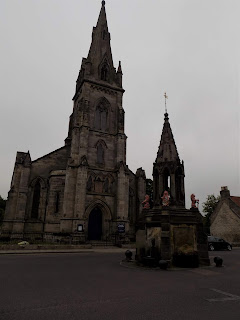 A picture of the Palace itself: 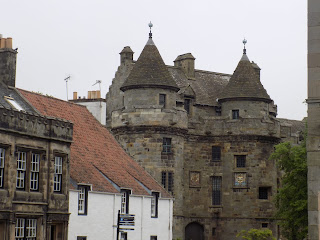 They didn't allow photography inside, given the age and delicacy of some of the materials. However, you can see a photograph of its chapel, for which the Palace is famous, on the Falkland Palace website, about halfway down the page. The Falkland Chapel Royal is the only royal chapel in the United Kingdom that is Catholic, which I believe it has been since 1896.

After Falkland, we went to Glamis Castle, owned by the Lyon family. (Glamis is pronounced as if the 'i' weren't there.) 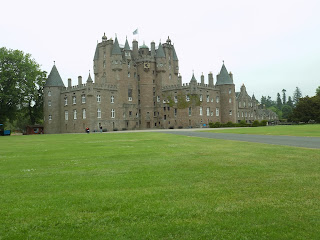 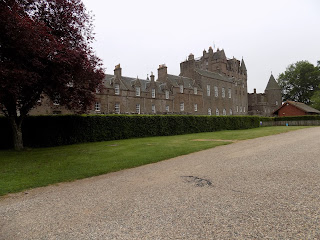 Glamis was the place King Malcolm II was murdered; at that point there was a royal hunting lodge. This is the historical foundation for what is actually Glamis Castle's greatest claim to fame. When William Shakespeare wrote Macbeth, he made Macbeth the Lord of Glamis, although the historical Macbeth was never anywhere near the castle: "All hail, Macbeth! hail to thee, thane of Glamis!" It was probably the northernmost Scottish castle of which he could be sure his audience had heard, since Lord Glamis was probably at the English court around about that time. The castle is also famous as a haunted castle. According to one story, in the fifteenth century one of the Lords Glamis, or else one of their family members, usually known as 'Earl Beardie' was addicted to gambling. The servants begged him to stop gambling on Sunday; Earl Beardie swore an oath and said that he did not care about that; he'd play until doomsday (or with the Devil himself, according to one version). A dark-haired stranger showed up shortly afterward and began to play with Earl Beardie, late into early Sunday morning, and they have been playing ever since. Another story attached to Glamis is that in every generation of the family, a monster is born and bricked up in the walls. In the chapel there is a seat reserved for the 'White Lady', usually said to be the ghost of Janet Douglas, Lady Glamis, who in the sixteenth century was burned (due to a false accusation by the king) for witchcraft, and who is said occasionally to appear there to pray.

After Glamis, we headed back south to Scone Palace, near Perth, which is also, of course, mentioned in Macbeth. (As with a lot of Scottish names, the 'o' is pronounced as if it were a 'u'.) Scone Abbey was the place kings were crowned, sitting on the Stone of Scone which had been brought there by King Kenneth MacAlpin. In 1559, John Knox whipped up a mob that came to Perth and sacked it. The Abbey was highly damaged, but continued to function until it was given to William Ruthven as a secular estate. The Ruthvens rebuilt the abbey to be a nice palace, but they were charged with treason in 1600 and the Palace was turned over to the captain of the king's guard, David Murray, who became the first Lord Scone. 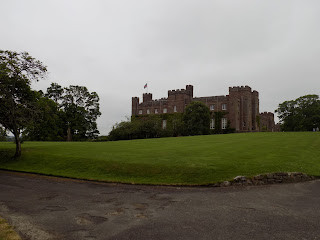 Coming in to Scone, we found a Scottish celebrity. It's a Heilan Coo! 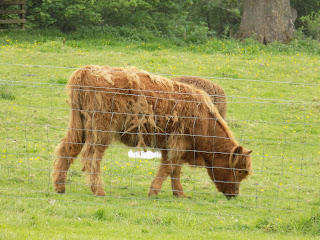 The shaggy Highland cow, with its double coat of hair and weird hairstyles, is always popular. They also have peacocks: 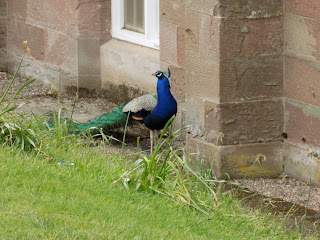 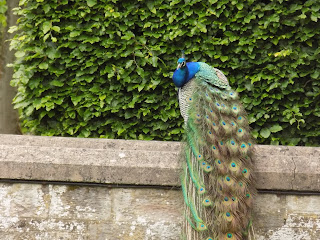 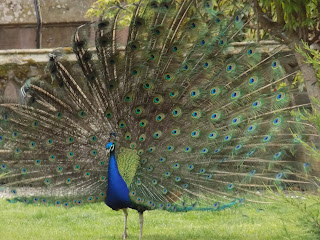 On Moot Hill, the place associated with the coronation of kings, there is a nineteenth-century mortuary chapel, in front of which they've put a mock-up of the Stone of Destiny: 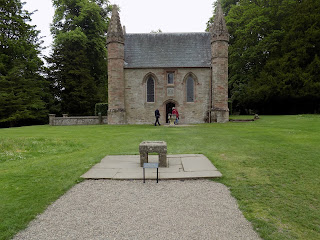 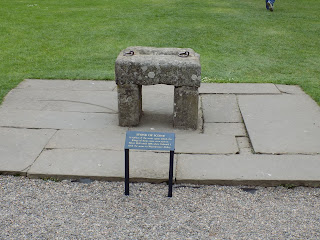 And back to Edinburgh, and that was a day.

to be continued
Posted by Brandon at 4:32 PM