From Glasgow we took a train to Edinburgh and thence to South Queensferry, also just known as Queensferry or sometimes even just The Ferry. The name of the town comes from Queen St. Margaret of Scotland, who in the eleventh century is said to have established it in order to ferry pilgrims going to Dunfermline across the Firth of Forth; she herself was ferried over after her death in 1098 to be buried in Dunfermline, where Scottish royalty was often buried. Today it is the location of the three Forth Bridges. Here is a photograph (from the previous trip to Falkland Palace) that has all three bridges in it; you can just make out the third behind the one on the left. 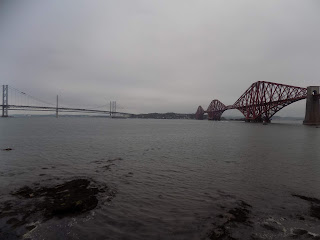 Here is the Forth Rail Bridge, with a cruise ship. You can also see one of the Islands of the Forth, Inchgarvie (Innis Garbhach in Gaelic means 'Rough Island'). Inchgarvie has a long history of being fortified, originally to protect the ferry. It was refortified in the early twentieth century, but has only been in occasional use since the 1930s. 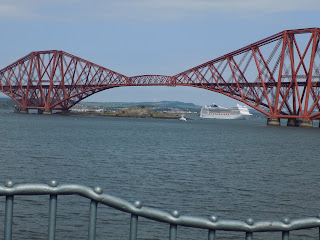 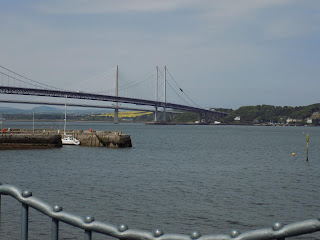 The Hawes Pier, which once was the ferry: 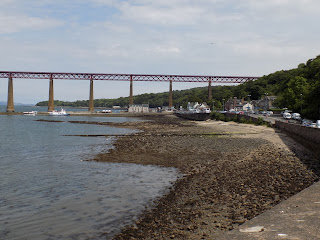 One of the most famous places in Queensferry is The Hawes Inn: 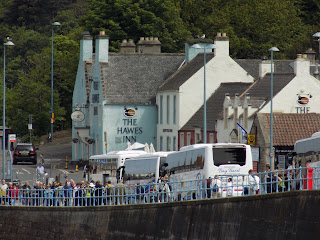 Robert Louis Stevenson wrote at least part of Kidnapped there, and, indeed, it plays a major role in the story, since Davie Balfour is kidnapped just outside of it (notice that he mentions, without naming, Inchgarvie):

Just then we came to the top of the hill, and looked down on the Ferry and the Hope. The Firth of Forth (as is very well known) narrows at this point to the width of a good-sized river, which makes a convenient ferry going north, and turns the upper reach into a landlocked haven for all manner of ships. Right in the midst of the narrows lies an islet with some ruins; on the south shore they have built a pier for the service of the Ferry; and at the end of the pier, on the other side of the road, and backed against a pretty garden of holly-trees and hawthorns, I could see the building which they called the Hawes Inn.

One of the more striking buildings in Queensferry is the Jubilee Clock Tower. Queensferry was designated a 'royal burgh' because of its economic importance, and every royal burgh was required to have three things: a tolbooth (also called a town house), which would basically be what we would call a courthouse; a tron, which was an official weighing place; and a mercat cross, to mark where the open market was. This building was originally the Queensferry Tolbooth, which was built in the seventeenth century, although the steeple is from 1720. It is linked to Rosebery Memorial Hall, which was gifted to the town in 1893 by the 5th Earl of Rosebery. 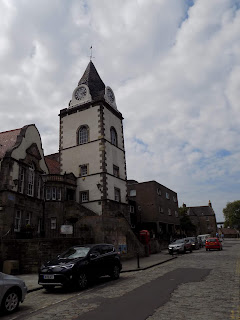 From Hawes Pier we took a ferry out to Inchcolm Island. The town from the boat: 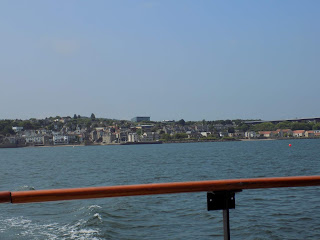 A closer look at Inchgarvie: 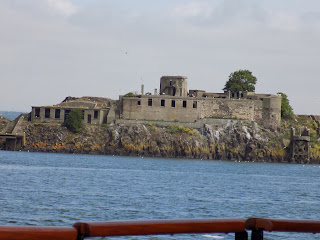 The primary aristocratic family around Queensferry has for a long time been the Primrose family. The family seat is Dalmeny House, just outside Queensferry, but in the eighteenth century it was Barnbougle Castle, which was the birthplace of the philosopher, Lady Mary Shepherd, née Primrose. Lady Mary Shepherd's father was the third Earl of Rosebery; her brother, the fourth Earl, built Dalmeny House. The castle was mostly left to ruin until the fifth Earl, Archibald, who became Prime Minister, basically rebuilt the whole thing in Scottish Baronial style in order to house his private library and give him a place where he could practice his speeches. Here is Barnbougle Castle in the misty distance: 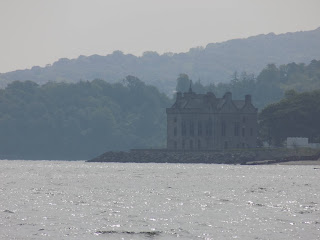 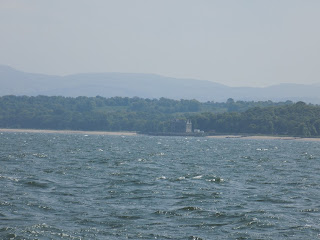 Up ahead we see Inchmickery (Innis nam Biocaire means 'Island of the Vicars', and nobody knows for sure why it was called that, although it may, like Inchcolm have housed a monastic institution at one time). It was fortified and used as a gun emplacement in World War I and World War II, and famously looks like a battleship. That's probably just accidental, but the story they like to tell tourists is that it was deliberate. 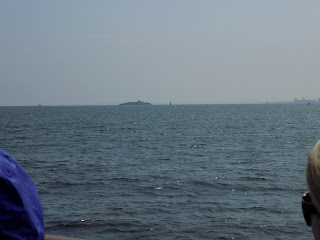 Over to the right you can see Edinburgh: 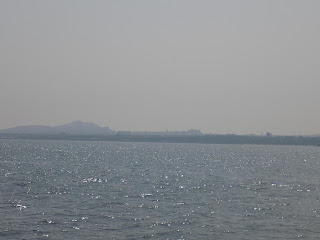 One of the attractions of the ferry to Inchcolm is that you can see gray seals hanging out: 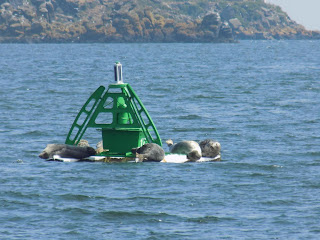 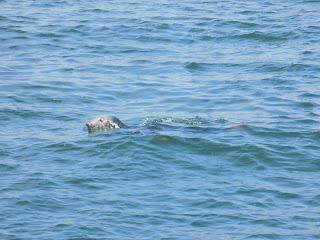 Incholm is often called the Iona of the East; its name, Innis Choluim, means Columba's Island. St. Columba is said to have visited it in 567, and it may have become a location for monastics shortly afterward. Its location near the ferry on the Dunfermline pilgrimage route likely increased its importance after St. Margaret's day. It became an Augustinian abbey in 1235, and the ruins of the abbey there are the best preserved medieval monastic house in Scotland, being saved from destruction in the Reformation by the inconvenience of getting a mob across the water to an island. It was, however, abandoned. It had only occasional uses until the twentieth century, when it became part of the Forth defenses. On the east end of the island, on the right, you can see fortifications from World War II: 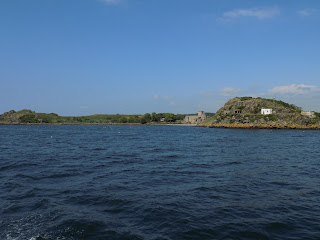 Inchcolm is mentioned in Shakespeare's Macbeth:

That now
Sweno, the Norways' king, craves composition:
Nor would we deign him burial of his men
Till he disbursed at Saint Colme's inch
Ten thousand dollars to our general use.

Immediately next door to Inchcolm is a tiny island, little more than a pile of rocks. Its official name is Swallow Craig, but it has come to be known by a more unofficial title, Inch Gnome: 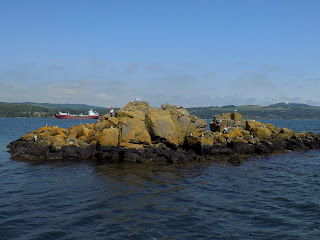 The Abbey on Inchcolm: 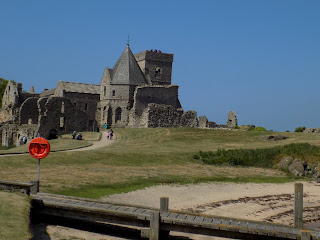 Fragments of a rood screen, and other parts of the ruins: 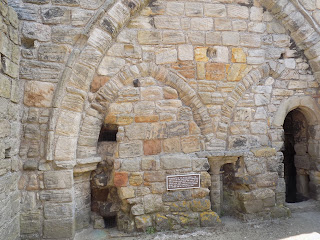 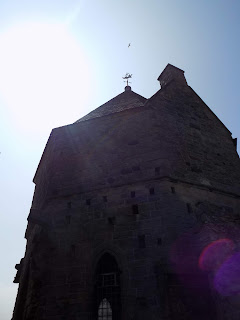 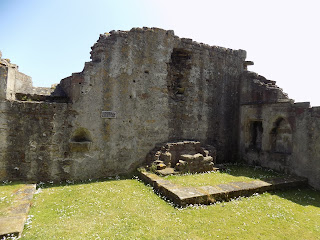 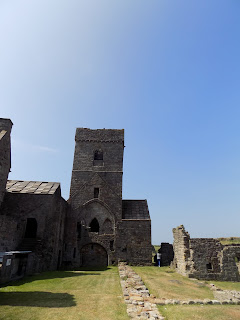 You can climb up the very, very, very narrow stars of the tower. Some views from the tower: 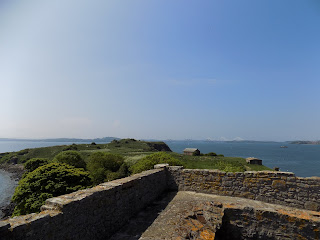 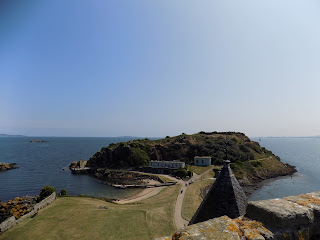 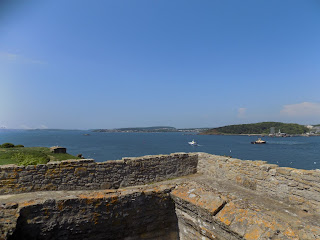 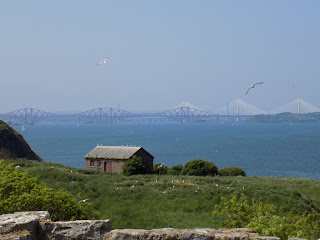 Once we returned from Inchcolm Abbey, that was about the whole trip; the next day it was a flight back to the States.

As with the Italy trip, though, I'll have a few posts with miscellaneous photos.
Posted by Brandon at 11:48 AM