Opening Passages: From The Saga of the Greenlanders:

Herjolf was the son of Bard Herjolfsson and a kinsman of Ingolf, the settler of Iceland. Ingolf gave to Herjolf the land between Vog and Reykjanes.

At first, Herjolf farmed at Drepostokk. His wife was named Thorgerd and their son was Bjarni; he was a promising young man. While still a youthful age he longed to sail abroad. HE soon earned himself both a good deal of wealth and a good name, and spent his winters alternately abroad and with his father. Soon Bjarni had his own ship making trading voyages.... (p. 3)

From Eirik the Red's Saga:

Oleif when on Viking expeditions around Britain, conquering the shire of Dublin, over which he declared himself king. As his wife he took Aud the Deep-minded, the daughter of Ketil Flat-nose, son of Bjorn Buna, an excellent man from Norway. Their son was named Thorstein the Red. (p. 25)

Summary: The two Vinland-themed sagas cover roughly the same period, but in some very different ways. In The Saga of the Greenlanders, Bjarni Herjolfsson tries to find his father, who has emigrated to Greenland; Bjarni has never been to Greenland, but he risks the new trip. During the voyage, he is blown off course and sights new land, which he realizes is not Greenland; he eventually does make it to Greenland, but is criticized for not having even stepped off the boat to explore the new lands. Leif Eriksson, son of Eirik the Red, hears of this voyage and buys a ship; the original plan is for Eirik to lead the expedition, but Eirik is getting old and has a mishap in which he falls from his horse and takes it as a bad omen, so Leif leads it instead. Leif and his crew do find and explore new lands, which he names Helluland (Slabland) and Markland (Forestland), and an even better country that he names Vinland (Wineland) because of the grapes found there. (One of the completely accidental sources of entertainment in reading these sagas is how thoroughly unimaginative everyone is in naming things, the one exception being Eirik the Red, mentioned below. In fairness, plain names probably helped a bit with navigation, which has to be done largely by memory and description.) On the trip back, loaded with grapes and wood, Leif manages to rescue shipwrecked sailors and thereafter is known as Leif the Lucky.

Thorvald, Leif's brother, decides that Vinland needs more exploration, and when Leif gives him his ship he sets off to do exactly that. The settle in a truly beautiful place, but it turns out there are natives in the area, which the Scandinavians call Skraelings (we don't know exactly what the word means, but it probably means something like 'pelt-wearers', and we don't know whether they were Inuit or Mi'kmaq), and despite initial promising attempts at trade, things turn very badly due to the skittishness of both sides, and Thorvald is killed. They bury him there and return to Greenland. In Greenland, Thorstein, another of the brothers, decides to retrieve Thorvald's body, leading to the third voyage of the Eirikssons; however, they never make it, Thorstein dies of illness, and from the grave predicts that his wife Gudrid will remarry, and the man will be an Icelander. This she actually does, to a man named Thorfinn Karlsefni. They go on the fourth voyage to Vinland, and stay where Thorvald had camped. They meet the Skraelings again, and again, after an initially promising beginning, their relations degenerate into war; the Norsemen fight them off and then return to Greenland.

The last expedition is taken by Freydis Eiriksdottir; desiring wealth, she makes a deal with two brothers (one that she begins to break on the sly almost immediately). They make it to Vinland, but the two groups are constantly bickering. Freydis, who is cunning and evil, arranges the murders of the entire opposing party and returns home with all the wealth that had been collected by both groups, and thus extraordinarily wealthy. While she tries to keep her deeds secret, she is not entirely successful. Karlsefni and Gudrid eventually make their way to Iceland, and the saga attributes the root of its stories to Karlsefni; the pair will have three famous bishops among their descendants.

As I said, Eirik the Red's Saga covers the same period but in a different way, and it is immensely interesting to see the similarities and differences. There is no Bjarni. We start with Eirik the Red, which is why it gets its modern title, although Eirik is barely in it. (The original title of it seems to have been Thorfinn Karlsefni's Saga.) Eirik has to flee Norway because he murders a man; he ends up in Iceland, which he also has to flee because of a violent dispute; and that is how our heroes end up at the edge of the world in glacier-covered Greenland, which Eirik, in an unusual bit of Scandinavian marketing strategy, calls 'Greenland' because he thinks it will make it sound more attractive to potential settlers than a more accurate name would. Eirik's son Leif goes on travels, eventually ending up in Norway in the court of King Olaf Tryggvason, who gives him the mission of converting Greenland to Christianity. On his return, however, he is blown off course in a storm and discovers a new land rich with vines and wheat, which he calls Vinland. On the voyage from Vinland to Greenland, he rescues some sailors from shipwreck, showing his kind character. Back in Greenland, he converts the country and is afterward called Leif the Lucky.

There is interest in returning to the lands Leif discovered, and this is done by Thorstein Leifsson. Eirik goes along with them, although he has a mishap on the way in which he falls from his horse and hurts himself. Nonetheless, he goes, but they never make it instead being blown the wrong direction by storm.

When they return to England, Thorstein marries a woman named Gudrid. Thorstein dies of illness, but from beyond the grave, and while he makes no predictions, he warns them to engage in more Christian funerary practices and also warns Gudrid against marrying anyone from Greenland. Because of this Gudrid marries an Icelandic merchant, Thorfinn Karlsefni. Karlsefni and his partners plan a large expedition to Vinland, and after visiting a number of other lands along the way, eventually make it. There they meet the Skraelings; after an initially promising beginning in trading red cloth for pelts, relations between the two degenerate into war. The Skraelings have a catapult-like device for throwing stones and the ability to create the illusion of greater numbers than they have. The Norsemen are forced back. During the battle, Freydis Eiriksdottir, a clever and courageous woman, despite being pregnant manages to scare off a group of Skraelings that surround her by seizing a sword from a dead man's head and slapping it against her breast.

The Norsemen begin sailing back to Greenland, but still have a few obstacles to overcome; at one point they are assaulted by a strange, fast-moving man-like uniped creature that kills one of their men and then speeds away before they can catch it. They also meet another group of Skraelings; the adults escape by vanishing underground, but two children are captured and taught the Norse language. They tell the Norsemen stories of two kingdoms, one a nation that lives entirely in caves, and another a nation that dresses in white, which the Scandinavians take to be the White Men mentioned in one of the tales of St. Brendan the Navigator. A significant portion of the expedition never returns at all, but Thorfinn Karlsefni and Gudrid eventually make it to Iceland, where three of their descendants become famous bishops. 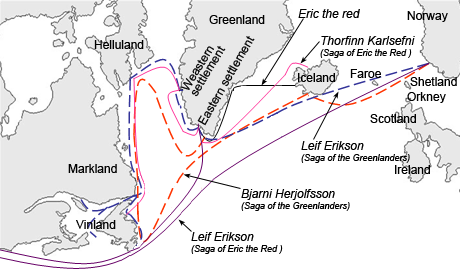 Favorite Passages: From The Saga of the Greenlanders:

After a while he spoke in Norse: 'I had gone only a bit farther than the rest of you. But I have news to tell you: I found grapevines and grapes.'

'Are you really sure of this, foster-father?' Leif said.

'I'm absolutely sure,' he replied, 'because where I was born there was no lack of grapevines and grapes.'

They went to sleep after that, and the following morning Leif spoke to his crew: 'We'll divide our time between two tasks, taking one day for one task and one day for the other, picking grapes or cutting vines and felling the trees to make a load for my ship.' They agreed on this course.

It is said that that boat which was drawn behind the ship was filled with grapes. (p. 8)

From Eirik the Red's Saga:

Leif fell in love with a woman named Thorgunna. She was of very good family, and Leif realized that she knew a thing or two.

When Leif was leaving Thorgunna asked to go with him. Leif asked whether her kinsmen were of any mind to agree to this, and she declared she did not care. Leif said he was reluctant to abduct a woman of such high birth from a foreign country -- 'there are so few of us'.

Thorgunna spoke: 'I'm not sure you'll like the alternative better.'

'I'll take my chances on that,' Leif said.

'Then I will tell you,' Thorgunna said, 'that I am with child, and that his child is yours. It's my guess that I will give birth to a boy, in due course. And even though you ignore him, I will raise the boy and send him to you in Greenland as soon as he is of an age to travel with others. But it's my guess that he will serve you as well as you have served me now with your departure. I intend to come to Greenland myself before it's all over.' (p. 34)