The Nativity in Paintings I 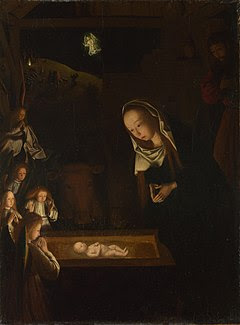 This is one of the most famous Nativity paintings, called Nativity at Night. It is a fairly small oil painting on oak panel that was made in the late 15th century by Geertgen van Haarlem; it was probably for private devotional use. It is actually an adaptation of an earlier painting by Hugo van der Goes which no longer survives; from descriptions and other versions (the most famous of which is Michael Sittow's early 16th-century version) we know that Geertgen's version shrinks and simplifies the original, and also reverses the orientation. The effect of the simplification, however, is quite striking, and I think makes for much of the attraction of the painting: it is all light and darkness.

All major Nativity scenes in painting are mediated versions of the original stories, much as all Christmas pageant plays are mediated versions of the originals. In this case the mediation is by way of St. Birgitta of Sweden's vision of the Nativity, which still exercises its influence. It is to Birgitta that we owe the image of the Virgin kneeling before the manger; on the basis of the striking description she gives of this in her Revelations, this became a popular scene in paintings, and thus a common part of Nativity scenes in any medium. And the brilliant light radiating from the Christ Child, which makes this painting so striking, is a Bridgettine detail, as well.
Posted by Brandon at 5:47 PM