The Nativity in Paintings II 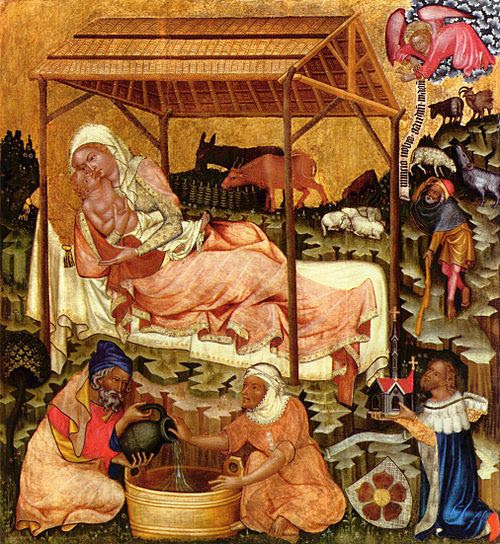 This painting, by the Master of Hohenfurth, also known as the Master of Vyšší Brod, dates to the fourteenth century and originally was part of an altarpiece devoted to the life of Christ. The painting is a mix of Eastern and Western styles. The posture of the Virgin, lying in bed with the newly born Christ Child rather than kneeling before a manger is (at least in the late medieval and Renassiance period in the West) usually a sign of Byzantine influence, which often came by way of Byzantine communities in Italy. In general this attitude, associating the Nativity with more standard birthing practices, emphasizes the humanity of Christ, while the genuflecting attitude emphasizes the divinity of Christ; naturally, the more realistic the style of painting the more one would want to do to represent the divinity of Christ by symbolism, while in a more stylized style one might well prefer to emphasize the humanity of Christ.

Notice the ox and the ass, which are very nicely painted here in the background. They were there in the previous painting, as well, although there the ass is a little difficult to see. The two animals are not found in either Matthew or Luke, but are pretty much ubiquitous. They come from another Bible verse, Isaiah 1:3, in which the prophet says, "The ox knoweth his owner, and the ass his master's crib." Indeed, the ox and the ass pre-date almost all other artistic conventions regarding the representation of the Nativity; it is possible to find very early representations of the Nativity consisting entirely of Christ in swaddling clothes with an ox on one side and an ass on the other, nothing else in sight. That particular representation seems to owe itself to another prophet, Habakkuk 3:2, at least in the Septuagint:

O Lord, I have heard thy report, and was afraid: I considered thy works, and was amazed: thou shalt be known between the two living creatures, thou shalt be acknowledged when the years draw nigh; thou shalt be manifested when the time is come; when my soul is troubled, thou wilt in wrath remember mercy.

Thus in those artistic representations Christ is known between the two living creatures, ox and donkey. The two animals gain more significance in that they they are sometimes seen as symbolic of the faithful children of Israel (the ox) and the just Gentiles (the ass); in that way, the placing of the Christ Child in the manger of the ox and the ass serves as a metaphor for the Incarnation itself, for we are the ox and the ass, and He has come among us. It is really rather remarkable how constant the imagery of the ox and the ass has been; we're talking about an artistic tradition that's only just short of two millenia old. It probably helps that the ox and the ass are a free detail: since the conventions for how one represents the ox and the ass are not very elaborate, an artist can do almost anything with them, and thus contribute something unique to the depiction of the scene. It's always interesting, when looking at a painting of the Nativity, to ask yourself: What is the artist doing with the ox and the ass? It's usually not anything theologically profound, but there are times when it really adds some nice touches to the painting.
Posted by Brandon at 4:29 PM