The Nativity in Paintings IV 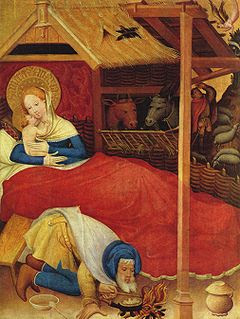 This is a painting by Conrad von Soest, from about the early fifteenth century; it is a small panel on the Niederwildungen Altarpiece, which, thanks to the joy that is Flickr, you can see in full here. This altarpiece is in a Protestant church in Bad Wildungen in Germany.

One of the big issues in any painting of the Nativity is what to do with St. Joseph. He doesn't have a big role to play; obviously all eyes are on Virgin and Child. And the Gospels don't actually tell us much about him. We know he was a carpenter (actually a tekton, which is a skilled artisan, but taking it as indicating a woodworker goes back at least to the second century). We know some of his dreams (which should have more paintings devoted to them than they do, although Rembrandt has a very lovely one and Daniele Crespi another). He never speaks -- not one word is attributed to him. What we do know is that he travels like crazy; every time we see him he is either in the middle of a journey, or about to start one, or has just finished one. He travels from Nazareth to Bethlehem, Bethlehem to Jerusalem, down to Egypt, up to Nazareth, and the last we hear of him directly, he and Mary are taking yearly trips to Jerusalem for Passover. That's a lot of moving. But the Bible doesn't give much to paint when it comes to Joseph and the Nativity; and unlike most of the other details that are left open, you can't really do anything you want with him, although painters sometimes do get creative.

Usually we find Joseph holding a candle, and sometimes sleeping. This is one of those Bridgettine details; in Birgitta's vision, Joseph is holding a candle, whose light is obliterated, swallowed up, in the light from the Christ Child. It's a feature often found even in paintings that are otherwise not all that Bridgettine; the candle was in the Flémalle painting. Joseph is cut out of the Nativity at Night painting; but the painting on which it is based certainly had him, and almost certainly had him holding a candle. There are other things he can do. In the Hohenfurth painting he is pouring water. von Soest's painting, however, is the only painting I have ever seen in which Joseph is cooking a meal. Somehow I like that very much -- it shows Joseph as a practical man of action. With so much travel he must have been an excellent organizer.

Because we are never told Joseph's age in the Bible, there are two different traditions in painting: the Old Man tradition and the Young Man tradition. The Old Man tradition has going for it the fact that Joseph disappears from the scene relatively early; he was certainly alive when Jesus was twelve, but beyond that we are told very little. Third- and fourth-century legends, most notably the Protevangelium of James, always portray him as old, though. The Panarion of St. Epiphanius of Salamis, which is perhaps the first to give an age, goes so far as to claim he was about eighty (with four sons and two daughters) when he was betrothed to Mary. And overwhelmingly this is what we overwhelmingly get until about the seventeenth century, although most painters paint him as rather younger than eighty. But here and there in very, very early representations he is portrayed as a much younger man, and this has become more common in the modern era.
Posted by Brandon at 10:23 PM