So the presumptive nominees of the major parties for President are, on the one hand, a billionaire who is universally recognized to be self-aggrandizing, and, on the other, a dynastic politician no one trusts who is under investigation by the FBI for violating national security law. I don't vote major party in presidential elections, so I don't have anything more to say about that except: 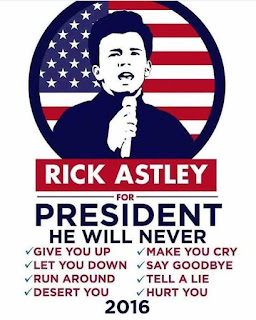 At this point, to be sure, it really wouldn't be surprising if we got to the voting booth and turned out to be rickrolled.

I once had an idea for a story in which the American President, President Beltrane, is a fantastically popular supervillain who vacations in his volcano lair, has a vice president who is an inarticulate Frankenstein-monster named Henchman, and whose campaign promises and policies consist of a mix of supervillain schemes and taking real political slogans to an insane limit. For instance, as a tax-cutting measure he holds Ireland for ransom in order to pay for government paperclips, and he advocates forcing everyone to undergo weekly physical examinations at the doctor's office because it's not universal health care if there are people not receiving it. But looking at this election, I find that there are just infinitely many ways in which I am not imaginative enough.
Posted by Brandon at 11:28 PM